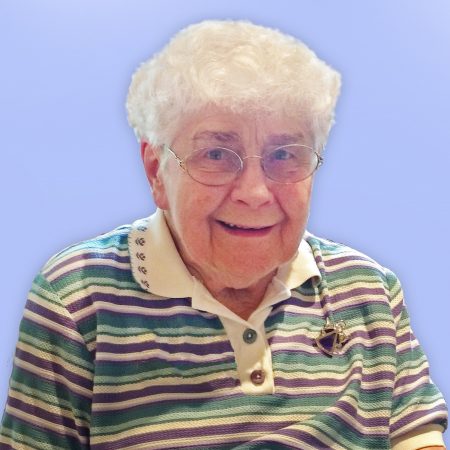 Although much of her life might appear uneventful, Sister Catherine Ann described her years as a Dominican Sister to be “wonderful, beautiful.” Her childhood and youth prepared her for a life of generous service. The third child of Ralph and Catherine Peplinski Winowiecki, Ann was born in Leelanau County, January 11, 1927. There were thirteen children born to this family; four died in infancy. As one of the older girls, Ann helped her mother in caring for the younger children.

For three years Ann attended the public school in Cedar and then transferred to Holy Rosary School in Isadore. When the family moved to Traverse City, Ann went to St. Francis School and met the Grand Rapids Dominicans who taught her through the eighth grade. It was at this time that she first felt a desire to enter the convent, but she delayed her decision to enter for two years to take care of her younger brothers and sisters. During these years she worked in Detroit during the school year and returned in summers to pick cherries in Traverse City during the harvest season.

By 1946, Ann was free to follow her earlier desire and on February 2nd came to Marywood to enter the Dominican Sisters’ congregation. She received the habit in August 1946, taking as her name in religion a combination of both her mother’s name and her own. She began working toward her high school diploma as a postulant, but that goal was deferred for many years due to her active life in ministry. She received her diploma twenty-five years later in 1973, the year of her Silver Jubilee.

Sister Catherine Ann served faithfully in food service in places both large and small. These included St. Mary, Carson City; Holy Cross, Santa Cruz; Beaver Island; St. Joseph Seminary, Grand Rapids; Nazareth Hospital, New Mexico; and Marywood. Between 1967 and 1973 she served at Aquinata Hall where she assisted elderly and infirm Sisters with sewing, mending and any other needs they might have. Then she spent two years on the staff at the Sisters’ House of Studies at Aquinas College. In 1976 she began fifteen years as a baker at Marywood, a favorite task in the ministry of food service. Her warm, delicious breads, iced breakfast rolls, cookies and other baked goods delighted postulants, novices and professed sisters alike. She rose early in the morning to start the baking. The fragrance of fresh baked goods wafted throughout the kitchen and dining areas, making “Sr. Katie’s” (as she preferred to be called) baking room a popular stop for postulants and novices finishing their duties in the laundry. Early on the morning of January 10, 1986, as she lit the oven, a gas leak caused a terrific explosion sending her to the hospital burn unit and requiring skin grafts to facilitate healing. All were impressed with her resilience, and she was soon back in the bakery doing what she loved most of all.

In 1991, Sister Catherine Ann began a new ministry in Green Bay, Wisconsin as a live-in caregiver and prayer companion to the mother of Sister Helen Miller. After four years in this ministry, she returned to Marywood, where she volunteered wherever she saw a need. This included thirteen years in the mailroom, sorting and delivering mail and assisting others as needed.

Sister Katie had a sense of curiosity about our world and a genuine interest in the people she encountered. In the summer of 1978, she participated in the congregation’s In Pilgrimage program, and in 1985, she traveled to New Mexico, Arizona and California. For many years, Sister Katie traveled to Tennessee to visit her two brothers and she took very special care of her brother Jerry who had special needs. When Jerry returned to Grand Rapids she continued her special attention to him and enjoyed his company.\

Sister Katie enjoyed listening to music, reading, crocheting, writing letters, making cards and going for long walks. In fact, unless the weather was severe, Sister Katie was outdoors with her face in the sun and the wind at her back up until the very end of her days when such sojourns were no longer possible.

Sister Catherine Ann is survived by her sister Geraldine (Jim) Brown, Conklin, MI; and her brother Jerry Winowiecki, Grand Rapids, MI; nieces and nephews, many friends and members of her Dominican Community.

We commend Sister Catherine Ann to your prayers.