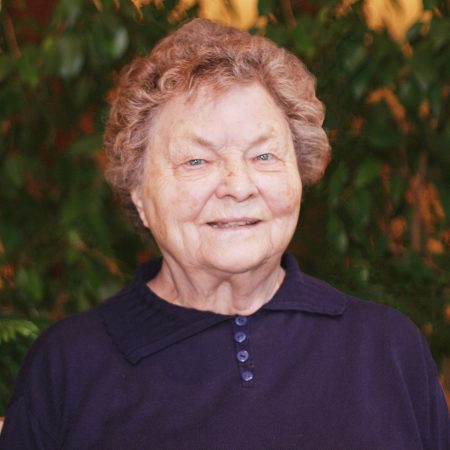 “There is gold and profusion of pearls . . .” (Proverbs 20:15) “To the gold I have come, the pearls are yet in God’s gift of time. My adopted country and Dominican family have been a blessing; for both I am sincerely thankful.”

Caroline Nowak, born April 1, 1923 in Melville, Saskatchewan, Canada, was the eleventh child and ninth daughter of Joseph and Katherine Kot Nowak. Her parents, both from Krakow, Poland, had emigrated separately to the “wild and wooly West.” They met and married in Melville, Saskatchewan where they soon started a family on their home farm. Hoping for an addition to the two sons he had to help him with the farm work, Caroline’s birth was something of a disappointment to her father as she was the ninth daughter. Her mother, however, was delighted to have another helper!

Until Caroline was seven years old, the farm was her whole world. Then her education began in a little green and white public school where she was thrilled to meet other children and expand her worldview. Just one year after Caroline began school, her mother died, leaving her large family, including four younger than Caroline. Later in life, Sr. Carol Ann reminisced: “I was too young then to realize how much she meant to us.” When Caroline was nine she was prepared for First Communion by Grand Rapids Dominican Sisters who were teaching in Melville. Later she met more Sisters at St. Henry’s High School where she also began to think of her own vocation under the influence of Sister Edward Aloysius Theisen. When Caroline graduated in 1942, WWII was in progress, and she moved to Toronto to work in a war plant. She sometimes joked that she was the original Rosie the Riveter.

On March 20, 1947, Caroline entered the congregation at Marywood. At reception, she was given the name Sister Carol Ann. While maintaining a great love for her native land of Canada, Sr. Carol Ann became a citizen of the United States through the process of naturalization on June 19, 1956.

From 1986 until her retirement, Sr. Carol Ann assisted in the Archives at Marywood as well as tending to the gardens in the Aquinata Hall patio. She was so well organized that she soon carried the whole arrangement of the archives in her head, and became an expert on the life of the congregation and its members. She enjoyed putting out displays for special occasions, and was superb at tracking the location of documents – all without the help of a computer.

Sr. Carol Ann earned a bachelor’s degree in education from Aquinas College and a Master’s in Religious Education from the Aquinas Institute of Religious Studies. Other certifications included a teaching certificate from the state of Michigan, and one in Library Science from Western Michigan University.

During summers, Sr. Carol Ann traveled in the American and Canadian West, including a visit to the World’s Fair known as Expo ‘86 in Vancouver. In 1978, she participated in the congregation’s In Pilgrimage program, which she enjoyed very much.

Sister Carol Ann was steadfast, a quiet and efficient worker and always gracious. Her interests included music and sports. She enjoyed attending concerts and singing in choirs. She spent many an autumn afternoon quietly crocheting and watching football – cheering for either the Lions or Notre Dame. Attending Grand Rapids Griffins hockey games with her nephew Jack was also a special pleasure and she would cheer for the Detroit Red Wings, unless the Toronto Maple Leafs were playing – of course! She was proud of her Canadian heritage, and yes, she knew all the verses of O Canada! by heart. She will be greatly missed by family and friends alike who came to know and love her quiet ways and steadfast presence.

Sr. Carol Ann is survived by nieces, nephews, many friends, and members of her Dominican Sisters~Grand Rapids Community.

We commend Sister Carol Ann to your prayers.

From 1986 until her retirement, Sr. Carol Ann assisted in the Archives at Marywood. She was so well organized that she soon carried the whole arrangement of the archives in her head, and became an expert on the life of the congregation and its members.

She spent many an autumn afternoon quietly crocheting and watching football – cheering for either the Lions or Notre Dame.

Sister Carol Ann with members of the 2017 Aquinas College Hockey Team who won their National Championship that year and celebrated their win with the Dominican Sisters~Grand Rapids.