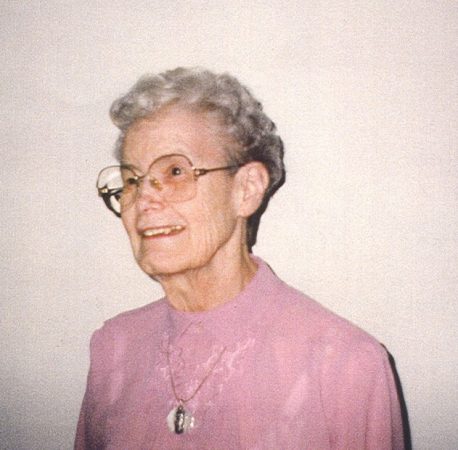 At the time of her Golden Jubilee in 1986, Sister Bridget wrote, “My future hope is stated well in Psalm 27: ‘I believe that I shall see the goodness of Yahweh in the land of the living’, Amen!”

All these many years the goodness of the Lord was manifested in dear Sister Bridget’s full, rich and beautiful life. And, now that the good Lord has called her HOME to the “land of the living,” her vision of God has attained perfection.

It was in Melville, Saskatchewan, Canada that Sister Bridget became the fifth in a family of two boys and three girls born to Bion Thomas and Mary Elizabeth Kain Hall on March 13, 1915. Her father was of English descent and her mother, Irish. On May 23, 1915, she received the saving waters of Baptism and the name of Georgina Bertha.

At the age of six Georgina started St. Henry Separate School in Melville, staffed by lay teachers. By the time Georgina was in grade nine, our Sisters had come to staff the school. A year after she entered school she received her First Holy Communion – a day that was very special and meaningful to her. After receiving the Sacrament of Confirmation from Archbishop McGuigan of Regina on June 21, 1931, something beautiful happened in Georgina’s life. About this, she remarked, “Now again I felt the impulse to give my life to Christ. My dream of youthful days returned.”

Prior to this in April 1928, when Georgina was only thirteen, a heavy cross became hers. Her mother died very suddenly of a heart and asthma attack in a snow storm. Georgina felt it keenly that she was deprived of her mother’s ever-present love and support. Her mother, who was a daily communicant, was a wonderful example to Georgina.

Georgina gave serious thought to her future profession and concluded that if she were to be a teacher, why not as a religious. Sister Elizabeth Rose Theisen, the principal at St. Henry School, was a great help to her during this time. Much of the work at home fell to Georgina. But in 1934 when her sister Ellen came home as a graduate nurse, Georgina knew Ellen could take care of the father whose health had become progressively worse. She felt she could now be what she wanted to be for a long time – a nun.

It took some time before Georgina was able to get her papers to come to the U.S. Finally on April 28, 1935, she was able to enter our Congregation. Sister Leonora Gallagher was her postulant mistress. Sister Jerome Smithers and later Sister Fabian MacDonald were her novice mistresses. On August 4, 1936 she received St. Dominic’s white habit and the name of Sister Bridget of Jesus. Her dear father died while she was a novice but Sister Bridget was unable to attend his funeral. Nevertheless, she had the tremendous consolation to know that he was converted to Catholicism before he died. Mother Euphrasia Sullivan was the Mother General, both at the time of Sister Bridget’s reception and first Profession. Sister Bridget’s class remained novices for only one year, a practice that did not long continue.

After Profession Sister Bridget and Sister Nathaniel Lenhardt were sent to Moose Jaw Normal to prepare for teaching in Canada. The following year Sister Bridget was assigned to St. Alphonsus, Grand Rapids, but remained there for only a semester. It was then back to Canada for ten years, first as a grade one and then as a high school teacher. In a sense teaching in Canada was easier for Sister Bridget than it was for our American Sisters. Not only did Sister Bridget teach in the regular school, there were always catechism classes to teach and summertime meant going to outreach posts and living and working under very trying conditions.

In 1949 U.S. schools were to be the recipients of Sister Bridget’s excellent teaching ability and her beautiful rapport with students. Her assignment took her to Sacred Heart, Muskegon Heights. She then spent the next seven years at Our Lady of Fatima Parish in Albuquerque, New Mexico. She had had high school experience in Canada, but beginning in 1958, her next seventeen years were in Michigan high schools: Catholic Central, Grand Rapids; St. Joseph, Saginaw; Catholic Central, Alpena; and Catholic Central, Muskegon. During her almost forty years as a classroom teacher, she taught all the grades from one to twelve. Her favorites, however, were “the little ones,” for, as she remarked, “You get fresh wisdom and a laugh each day.” In high school her teaching specialty was religion.

In 1975 Sister Bridget launched into a new venture. For the next eight years she was the beloved and competent Religious Education Director at Sacred Heart, Merrill. During this time there were two or three senior Sisters in residence whose Apostolate was that of Prayer and Good Works. What a beautiful spirit pervaded the Merrill convent!

The House of Studies where there were many Senior Sisters was her next mission; there she was engaged in Health Care for two years. When the House of Studies ceased to be a Sisters’ residence in 1985, Sister Bridget came to Marywood and for four years she was in Pastoral Ministry at Aquinata Hall. Again she helped create a rich atmosphere of joy, love, compassion and helpfulness. During her years at Aquinata Hall and the years that followed, Sister Bridget taught an excellent course in Sacred Scripture to the Sisters. Admirably she was able to share “the fruits of her contemplation.”

In a brief autobiography Sister Bridget quoted the poet, “A thing of beauty is a joy forever,” and added, “I want my years of religious life to be just that: a joy for all eternity.” Sister was a most grateful, valiant woman who shared with many her love of Jesus, Mary, the Little Flower of Lisieux and the Rosary. She expressed the hope that her last statement be, “Praised Be His Holy Name” and “Ave Maria Forever.” We pray that her fervent prayer has been answered and that she is now enjoying eternal peace, joy and love with God for endless time. ALLELUIA!

Sister Bridget is survived by nieces, nephews, cousins, many friends and a loving Community.

We commend Sister Bridget to your prayers.