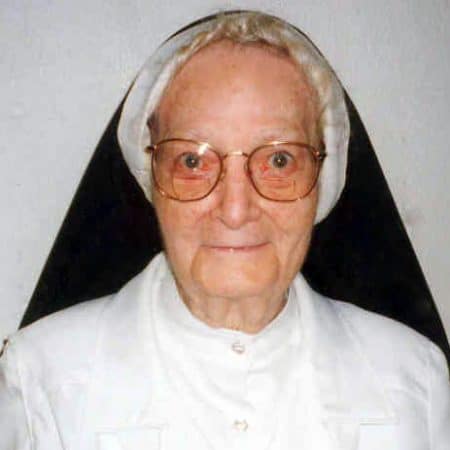 Sister Brendan ended a very early autobiography, written in August 1929 two years prior to her Final Vows, with these words: “Daily I beg the grace to always remain faithful to the grace of my holy vocation and to increase in the love of my Heavenly Spouse until He calls me to Himself.”

Many years have passed since she wrote those sacred words. On the evening of March 1, 2001 that all important final call came from the good Lord, and her Divine Spouse found her ready! Faithfully and well had Sister Brendan loved and served her God!

It was at Cheboygan, Michigan on June 27, 1905 that Sister Brendan became the eighth child of a family of four girls and seven boys born to John and Bertha Schmidt Donovan. Undoubtedly it was from her dear father of Canadian Irish descent, and her dear mother of German descent, that she inherited her staunch physical, moral, and spiritual stamina, and her integrity that ever remained so characteristic of her.

At her Baptism at St. Francis Parish, Alverno, Michigan on August 27, 1905 she was given the name of Ida Elizabeth. Her First Holy Communion and her Confirmation by Bishop Michael J. Gallagher were on the same day, September 13, 1917, at St. Francis Church. The year 1917 also had another significant event for Ida, for that was the year two Little Sisters of Poor from Grand Rapids came to Cheboygan begging for alms. It was the first time Ida had ever seen Sisters, and they made an indelible impression on her. She knew then that the Lord “had called her to be a Sister” and she never altered from this resolve.

At five years of age Ida entered McCleod School, a rural school in the Cheboygan County. For high school it was planned that she would go to Detroit and live with an Uncle and Aunt. At this time her sister Mary (later Sister Magdalen, R.S.M.) was a nurse in Ann Arbor, and through her Ida was introduced to the Kress family. It was decided that Ida would live with them and be a companion to their only child Joseph, who later became a priest. They attended St. Thomas High School in Ann Arbor. Here she had the IHM Sisters; Sister Honora, her favorite teacher, had a very strong influence on Ida and her religious vocation. For a time it was a toss-up between Ida’s becoming a missionary or an IHM, but eventually Ida became convinced that she should be a Grand Rapids Dominican.

After high school graduation from St. Thomas in 1922, she entered our Community at St. John’s Orphan Home. Sister Brendan had the distinction of being among the last group of postulants to enter at St. John’s and the first class to receive the holy habit at the new Marywood Motherhouse. At the Reception of the habit on March 7, 1923, she was given the name of Sister Brendan of the Immaculate Conception. Sister Loyola Finn was her novice mistress. Her First Profession of Vows was made to Mother Benedicta O’Rouke on March 7, 1925. On August 18, 1931 she made her Final Profession.

In 1952, prior to coming to Catholic Central, Grand Rapids, Sister Brendan was one of the five pioneer Sisters assigned to Pioneers Memorial Hospital in Brawley, California. Here her work was with hospital accounts.

In 1964 Sister Brendan joined the Aquinas College history department. She was no stranger to Aquinas College, however, as prior to this date, she had taught there several summers. After nine years at Aquinas, she was appointed administrator of House of Studies. For the next five years she continued teaching part time at Aquinas and at Emeritus Center.

A new challenge awaited Sister Brendan in 1978. Always interested in the poor, and having our Sister Anthony Marie Lotter as an exemplar, she became very involved at Emmaus Center at St. Andrew. Here her specialty was making boys jeans, sizes two through twelve. Having grown up with seven brothers, she was in her element. She also determined sizes for used clothing, waited on patrons, and did some tutoring. Sister Brendan ever remained the “Professor”; after Sister Aline Needham’s death in 1986, Sister Brendan continued teaching Sister Aline’s classes in Current Events at Aquinata Hall.

When the Sisters discontinued using the House of Studies as a residence in 1985, Sister Brendan came to Marywood, and continued her involvement at Emmaus Center. Then, too, she was ever ready to do her part in the many choir duties and activities that make community life richer and happier. She was always a vitally interested, loyal, and active member of our Dominican Community. Many a jubilee and community program had an “extra” Thomistic flavor because Sister Brendan was one of the presenters. Memorable, too, was the Dominican Educational Conference that she so ably organized. Always an excellent student, Sister Brendan’s pursuit of TRUTH and our Dominican ideals never waned. She took special pleasure in her contacts with the members of her own family, friends, and former students, and had a keen interest in their welfare. She once remarked that part of “the hundredfold” was her contact with former students.

In a recent biographical sketch, Sister Brendan reflected on her blessings as a religious: the opportunity to live in the house of the Lord; praying with the Church; sharing common life and working in concert with other dedicated members of the Church in apostolates set up to fill the needs of the Church. The living of Gospel values was very important to Sister Brendan. She concluded her brief biography by stating, “I am most grateful to God for His goodness in granting me the gift of my Catholic faith and my Dominican vocation, assured that ‘He has carved me in the palm of His hand (Is 49:16).’” And we Grand Rapids Dominicans are ever grateful that the good Lord directed Sister Brendan to our Congregation. She was such a loyal member of our Dominican family. Our Community has been enriched by her many long years of life, and her untiring dedicated service.

Sister Brendan is survived by her sisters-in-law Mrs. Cecile Donovan of Cheboygan, Michigan and Mrs. Ethel Sarazin of East Tawas, Michigan, many nieces, nephews, friends and a loving community.

We commend Sister Brendan to your prayers.