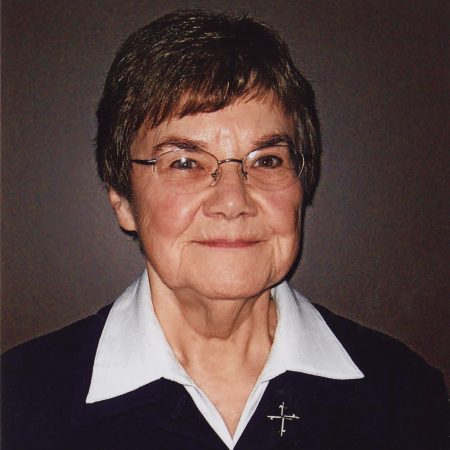 Study and itinerancy marked Sister Bernadette Mooney’s extraordinary and productive years as a Dominican Sister~Grand Rapids. She was ever open and responsive to calls to ministry in new forms and places, never afraid to take risk, always willing and eager to learn.

Bernadette was born April 13, 1933 and baptized three days later on Easter Sunday, April 16. She was the seventh of twelve children of John and Anna Nolan Mooney, grandchildren of Irish immigrants. The couple first lived near Hubbardston, where John taught in a one-room schoolhouse. After the birth of their first three children, they moved to Ionia where John supported the growing family by working as maintenance man at SS. Peter & Paul Parish.

Bernadette attended school at SS. Peter & Paul Academy in Ionia where she was taught by the Sisters of the Immaculate Heart of Mary. In her senior year, she had the leading role in the play, I Remember Mama. She graduated as valedictorian of her class in 1950.

Awarded a scholarship to Aquinas College, Bernadette planned to spend one year there before entering St. Mary’s School of Nursing in Grand Rapids. That plan changed when she came to know the Dominicans, especially Sister Marie Celeste Stang. Accompanying a friend who went to get admission papers from Mother Victor, Bernadette was given papers for herself – and decided to use them. Her friend changed her mind and subsequently married; Bernadette filled out the papers and was accepted.

Bernadette entered the congregation in 1951 and was immediately enrolled in the teacher preparation program. She did her student teaching at St. Andrew and St. Alphonsus schools. At reception she kept her baptismal name and added the title of Our Lady of Lourdes. After first profession, she became an enthusiastic and successful junior high teacher at St. Philomena in Beal City; St. Alphonsus and St. Stephen, Grand Rapids; St. Francis, Traverse City; Holy Rosary Academy, Bay City; and St. John, Essexville. Meanwhile she completed her college education through summer classes and received her B.A. from Aquinas – majoring in history.

In 1968, she received an M.A.R.E. (Masters in the Art of Religious Education) degree from her study of theology during summers at St. Paul Seminary, Saginaw.

Ready for a change from teaching, she assisted in the care of the children at St. John’s Home and found both an aptitude and desire for this kind of work. With a scholarship from the Grand Rapids Diocese, she studied for two years at the University of Michigan earning a Master’s in Social Work in 1971. Following her graduation from U of M, she served the diocese in group and marriage counseling. Then for the next ten years she worked in both Grand Rapids Public and Catholic Schools as a social worker. Along with a co-worker, she supervised thirty-seven staff members. During these years, she initiated and taught classes for parents and teachers. Characteristically, she continued taking classes for personal enrichment, including some in signing for the deaf.  That led to her next career change.

In 1981, Bernadette received a government grant for an interpreter’s training program at the University of Wisconsin in Milwaukee. After acquiring her certificate and serving a year of internship for the Diocese of Green Bay, she spent nine years in the Catholic Deaf Ministry of the Diocese of Lansing, first as coordinator and then as director. Her goal was to empower the deaf community to develop their own leadership and carry on without a hearing director. When that goal was achieved, she resigned to take a long-awaited sabbatical.

The sabbatical year included study at the Catholic Theological Union in Chicago. A high point of the program was a semester in the Middle East, where she studied biblical theology and visited sites throughout the Holy Land as well as in Greece, Turkey, and Egypt, which included a trip to Mt. Sinai on a camel, no less!

Next, Bernadette worked for Hope Network in their program to assist patients with brain injuries. She also served as coordinator of volunteers and computer operations at St. Alphonsus Food and Clothing Center.

Then, she began studying Spanish as preparation for a new ministry. In 1998, she went to San Pedro Sula, Honduras to assist in our mission there. Due to the devastation of Hurricane Mitch, her service turned into care for survivors. In 1999, Bernadette continued studying Spanish and worked as an intern to the Hispanic community of St. Andrew Parish in Grand Rapids, after which she ministered for three years in a Hispanic Ministry Outreach program in the city. In 2001, she participated in the first Parable Journey to Peru.

At the same time, Bernadette took advanced classes in Healing Touch through the West Michigan Healing Association and became a Master Reiki Practitioner through Dominican Center. In 2003 she began using these skills – ministering to the Sisters at Aquinata Hall and later at Marywood Health Center.

Bernadette was enterprising, creative, independent and open minded. She was willing to try new things and to take risks. She had rapport with persons of all ages, was friendly and hospitable and well-organized in whatever she undertook. A few of her many interests were reading, walking, conversation, travel, movies and drama, writing poetry, exploring uses of her computer, cooking and baking—at which she excelled.

Sr. Bernadette is survived by her sisters Esther (Arnold) Johnson of Grand Rapids, MI and Martha (Michael) Baczewski of Sand Lake, MI and her brother Bob (Eileen) Mooney of Charlotte, MI; nieces and nephews; many friends and members of her Dominican Sisters ~ Grand Rapids Community.

We commend Sister Bernadette to your prayers.

Pray for refugees throughout the world

Sister Bernadette Mooney visits with Sister Antonita Vigil at Marywood Health Center where she provided pastoral care for patients when the Dominican Sisters~Grand Rapids opened this ministry at Marywood.

Sister Bernadette began her work with people who are deaf in 1968 at Catholic Social Service in Grand Rapids. At that time, she was helping train foster parents for children who were deaf. Her passion for learning about deaf culture and helping others learn to communicate with deaf people of all ages would continue throughout her life. She taught CCD, coordinated retreats, taught sign language classes, and provided interpretation services in medical, mental health, and church settings.

Sister Bernadette interpreting for the Diocesan Retreat for the Deaf, with David Walsh, C.S.s.R. presider at closing liturgy on March 6-7, 1992 at the Maryville Retreat Center, Holly MI