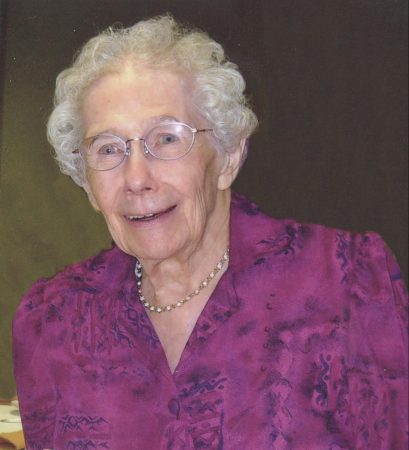 I did not ask God for success; I asked for a sense of wonder, and he gave it to me every day of my life.

This quote from Rabbi Abraham Joshua Heschel is one of Sr. Bede’s favorites and a fitting description of the manner in which she lived her life.

Laura Adele was born to Detlef Frahm and Laura Adele Bourbonnais Frahm in Isabel, South Dakota on July 21, 1915. Laura Adele was the oldest of four children from her mother’s third marriage. Twice widowed, her mother Laura had two older daughters from her earlier marriages. Sister Bede credits her father for nurturing her love of nature during her earliest years on the family farm. When Laura was seven years old, the family moved to her mother’s hometown, Saginaw, Michigan where she attended public school. When she was in the tenth grade, tragedy struck: Detlef Frahm died after being hit by an automobile. From that point on, God would become the Father who would watch over her and to whom Laura Adele would commit her entire life.

While in high school, Laura worked for Ruth and Harry Greene, caring for their five children and doing household tasks. It was through the influence of this faith-filled family that Laura received her interest in Catholicism and encouragement toward religious life. Throughout the years, Sister Bede remained deeply grateful to the Greene family for their positive influence in her life.

Soon after high school graduation, Laura received religious instruction and formally became a member of the Catholic Church on July 30, 1933. Encouraged by Mrs. Greene and Grand Rapids Dominican Sisters serving in her parish, Laura met with Sister Jerome Smithers. Dressed in her Sunday best and wearing high heels, Laura was greeted at the convent door by Sister Jerome, “Laura, I want you to come in and maybe you can tell me how you walk in those high heels?” Soon after, Laura asked to join the Grand Rapids Dominicans although she would later write, “I knew so little of God or a Sister’s life, but I had a strong and ardent desire to give my life to God.” Thus began her life-long journey with the Grand Rapids Dominicans.

Laura entered the Congregation on September 8, 1934, and received the Dominican habit and the name of Sister Mary Bede of St. Joseph on August 23, 1935. She made Final Profession of Vows on August 4, 1940. She completed a Bachelor’s Degree in Home Economics in 1959 from Fontbonne College in St. Louis, Missouri. In the years to follow, Sister Bede continued to study both spirituality and hospitality wherever she found herself: Aquinas Institute of Theology in Dubuque, Iowa; Cornell University in Ithaca, New York or Delta College in the Saginaw area.

Sister Bede served in the food service apostolate for thirty-eight years. She was one of six Sisters who opened Sacred Heart, Muskegon Heights in 1940 and was the homemaker when the House of Studies opened in 1960. To each of these missions, Sister Bede brought her enjoyment and love of the tasks at hand as well as her desire to make a home for all she served. At the time of her Golden Jubilee in 1985 Sister Bede wrote, “My ministry has been varied and challenging – stepping stones in my life. Some of the happiest years of my religious life were those in homemaking – cooking, sewing, studying and caring deeply for the health and well-being of both Sisters and priests whom I served.” For Sister Bede, food was sacred–God’s gift; it should be prepared lovingly and reverently. It was the work of artistry for as she paraphrased from Louis Nizer: “She who works with her hands, her brain, and her heart is an artist.”

Her work with Brother Herman Zacarelli, CSC and Fr. Ken Silvia, CSC at the Food Research Center opened Sister Bede to new horizons of consciousness, especially concern for those oppressed by unfair systems and bias. Sister Bede was an early advocate for respect and equality toward those working in the food service apostolate, and through her initiative, a strong component in spirituality was incorporated into the program. Advocacy for those underserved and underappreciated soon extended to include women, especially poor women, in the church and the world. While at St. Joseph’s Parish in Saginaw in 1970, in collaboration with Hazel Wilson and other leaders, Sister Bede initiated programs to promote the concepts of self-development and provide emergency services through the Good Neighbor Mission – a ministry that continues today.

In 1980, a new vista of serving God opened for Sister Bede. She began twenty-one years of pastoral ministry at Holy Spirit Parish in Shields, Michigan which included directing the RCIA (Rite of Christian Initiation of Adults), Christian service, visiting the sick, caring for the sacristy, tending to the plants and gardens, and providing hospitality at parish functions. It was here that Fr. Bob Bryne wrote in honoring her on the occasion of her Diamond Jubilee: “If I had to pick one thing about Sr. Bede which has made the deepest impression on me, I would immediately say that it is her prayerfulness . . . she does everything in a gracious and prayerful spirit. Her whole life has been a prayer lifted up to God.”

At the time of her seventieth Jubilee, Sister Bede wrote: “What a gift! I am in awe and wonder at the mystery of life! Jeremiah’s words, ‘I am the potter, you are the clay,’ remind me that from clay we have all been made; the original touch upon us is made by the fingers of God … so precious and unique for each of us. The years have fired my ‘clay,’ and events and experiences have glazed my life. I sing out ALLELUIA this Jubilee year and every day because my whole being is filled with deep gratitude for my family, friends, Dominican community, all who have touched my life, and for a faithful and loving God, the giver of all gifts.”

When asked to comment on her religious vocation, Sister Bede wrote, “For me, Dominican life is a journey of discovery. . . of constantly discerning God’s call in love and service to make the most of life, to harmonize with its rhythms, to savor it for all the meaning it will yield. I live in expectation of what the Dominican Charism is – God’s gift to me.” And so it is that the sense of wonder that was her prayer early in her life came to fruition in its fulfillment at the end.

Sister Bede is survived by nieces Betty Jo Boissonneault, Rae Jean Jump and many other nieces and nephews; a loving community and many friends, especially Virginia (Greene) Lewis and Sister Maureen Flanagan, OP.

We commend Sister Bede to your prayers.