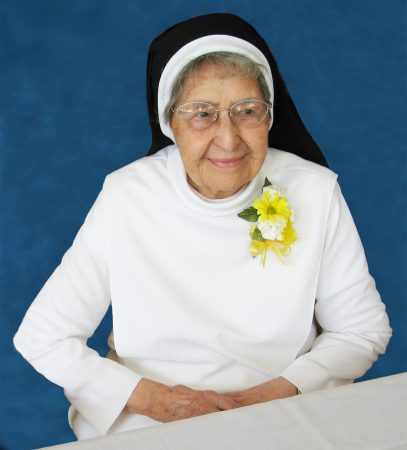 My soul is filled with wonder at the gift of your ever-abiding love. My spirit rejoices in you, my God, Who deigned to dwell among us and in us.

Sister Aurora wrote this paraphrase of the Magnificat for the community booklet celebrating the Golden Jubilee of her class. A soul filled with wonder is an apt description of Sister Aurora since wonder, the gift of God’s love, instilled in her the quiet joy and peace that marked her disposition all of her life.

Aurora Valerio was born at Ranchos de Taos, New Mexico on August 9, 1921 to Celso Valerio and Esther Mondragon Valerio. She was baptized five days later at the church of Our Lady of Guadalupe and confirmed on August 25, 1923, in the same church. Her first communion took place at St. Francis Church in the spring of 1928.

The arrival of a brother and two sisters completed the family. Since there was no Catholic school in town, Aurora spent her first six years in the public school. Intrigued by her mother’s account of her own school days with the Sisters of Loretto, she often prayed that Sisters would come to Taos. Before that came to be, when Aurora was twelve years old, her mother died. To help him raise his young family, her father invited his own mother into the home.

Two years later, as if in answer to her prayers, the Dominican Sisters came to St. Francis School. The next year Mother Eveline and Sister Jerome arrived to visit the school and while there Mother Eveline gave a talk on vocations and passed out a pamphlet about the community. After reading the pamphlet carefully, Aurora showed it to her father. She was afraid he would say that it was her duty to stay home and help her grandmother, but instead he replied that if this was what she wanted he would be happy and honored to let her go. But he reminded her of the long distance from home. She had already considered this, but she concluded that if girls from Germany and Ireland could come all the way to the United States to pursue their call, she could go to Michigan!

When Mother Euphrasia came the following year, Aurora talked with her. There seemed to be no obstacle to her entering the community, but there would be one delay. Her father died after a short illness, and on his deathbed he begged his mother to promise to keep his children together. A little later the grandmother heard of Aurora’s canceled plans and told her that she was free to go. Sister Aurora was always grateful to her grandmother for her loving care and understanding.
In the fall of 1938, she was among four young women from Taos who entered the Dominican Sisters in Grand Rapids. On August 16, 1939, she received the habit and the name of Sister Mary Edemia. She enjoyed the postulate and novitiate and remarked, “I can truly say that I was perfectly happy and I used to wonder whether it would be like that always.” Immediately after her profession in August 1940, she was sent to her first mission at St. Joseph Parish, Grand Rapids as a housekeeper. Here, great loneliness struck her daily as the other Sisters went off to school and left her alone at home. Cooking meals was a daily trial with many failures and she became discouraged that she would ever learn. However, with the kindly and good natured help of Sister Perpetua Maria and the other Sisters, she became a competent homemaker, and went on to serve in this capacity at many missions including Lake Leelanau; Melvindale; St. Francis, Traverse City; St. Mary, Muskegon; and St. John, Essexville. She also served at Nazareth Hospital in Albuquerque and at Marywood as housekeeper for Father Wilson.

Sister Aurora was thrilled when the community opened a foreign mission in Chimbote, Peru and in 1967 she joined the Sisters there. Again she found herself alone each day as the Sisters went about their respective ministries, but now she was more innovative and confident. Fluent in her first language of Spanish, she soon was doing the buying for the maternity hospital as well as the convent and supervising the cooking in the hospital. Because so many people were seeking instruction for the reception of the sacraments, Sister was asked to assist with this work and soon she was engaged in catechesis. Again, her fluency in Spanish was a great asset, along with her kindliness toward and attentiveness to others.

At her own initiative, a Mothers’ Club was formed. This support group assisted mothers in childcare, provided mutual support and offered opportunities to learn more about nutrition. Another important part of the Mothers’ Club was learning in the art and skill of sewing. Sister insisted that there be no competition among the women. They were all there to help and teach each other as well as learn. She herself gratefully learned from them. Her grandmother had taught her to sew well but now she learned to sew without a pattern and to master many decorative crafts of the Peruvian culture shared by the women. Before the word “empower” was commonly used, Sister Aurora in her work of the Mothers’ Club had quietly empowered the women in Chimbote with knowledge, skills and confidence to improve their own lives and that of their families. And Sister Aurora, in turn, grew in confidence, skill and grace.

In 1984, Sister returned to Michigan and for the first time experienced a culture shock she had not known in going from New Mexico to Marywood or from Michigan to Peru. The abundance, affluence, and waste appalled her, as did the price of everything. Fortunately, both on a long furlough and on her final return, Sister attended workshop-retreats for returning missionaries. Sister was grateful for the help these programs offered. At Marywood, Sister Aurora served as sacristan and assistant to the local superior. A lasting contribution was her delicate and skilled work in stitching the beautiful pall that is still used today on the caskets of all of the Sisters during their funeral liturgy. She also used her considerable skills as seamstress to make clothing for people in need and to assist Sisters with sewing projects.

Her friends remember Sister as gentle, prayerful and gracious to everyone. A classmate described her, in the biblical phrase, as “a true Israelite in whom there is no guile.” Sister once quietly, yet resolutely exclaimed, “God has been real good to me.” A woman of grace and dignity, Sister Aurora will be greatly missed even as she continues to inspire us by her life of deep faith, quiet manner and contemplative spirit.

The epitaph that Sister Aurora (a word meaning the dawn) composed during the 2001 August Dominican Days gathering is most appropriate: “Morning Star has been dazzled by the splendor of a greater light.”

Sister Aurora is survived by her sister Maria E. Herbert of Lead, South Dakota; her sister-in-law Vickie Valerio of American Fork, Utah; nieces, nephews; many friends and members of her Dominican Community.

We commend Sister Aurora to your prayers.

Sister Aurora with a wooden watermelon. Sister Emeliana Judis is in the background