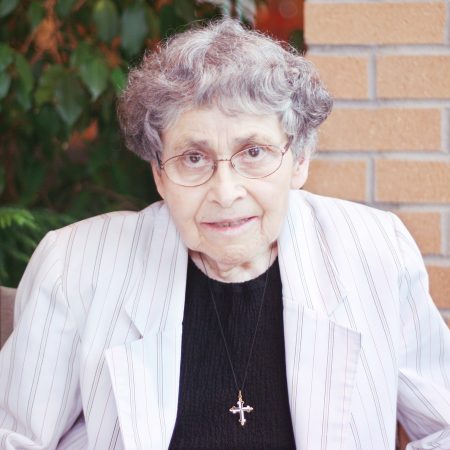 “What has helped us to persevere? Our wish bones, backbones, and funny bones!” Reflection on living religious life after fifty years.

The search for meaning and authenticity was a life-long process for Sister Audrey Sanchez. Over the years, through both joy and suffering, she became a deeply spiritual soul closely in touch with God. Audrey Dolores Sanchez was born December 23, 1929 in Belen, New Mexico. Her parents were Celedon and Catherine Sanchez. She had an older brother, Eloy Joseph, who became a Jesuit priest. When Audrey was ten years old, her mother died. Five years later, her father married Helen Chavez and together they had four sons, one of whom died in infancy.

Although Audrey attended Belen Public Schools, she became acquainted with the Dominican Sisters who staffed St. Mary’s. Here she became a member of the sodality known as the Children of Mary. As she neared graduation from high school, Audrey became aware of an inner search for meaning and she pondered the idea of becoming a Dominican Sister. Her friend, Rebecca Barreras, was planning to enter the convent in Grand Rapids, and so it was that in August 1947, both young women left for Grand Rapids with Mr. Barreras, who accompanied them on the train.

The two young women joined the class of 1947 in September. Six months later Audrey received the habit and the name Sister Mary Ricardo of the Sorrowful Mother. Sister Ricardo taught for over twenty-two years in parish schools in Michigan and New Mexico. She taught at Sacred Heart, Muskegon Heights; St. Alfred, Taylor; St. Norbert, Munger; St. Mary Magdalen, Melvindale; St. Francis, Ranchos de Taos; San Ignacio, Albuquerque; and St. Mary, Lowell. In addition to teaching in elementary grades, she taught music to junior high students and played the organ for liturgical services. During these years, she received her BA from Aquinas with a major in Spanish and her MA in Religious Education from the Aquinas Institute of Religious Studies.

When Sister Ricardo began her college education, she found inspiration in the words of an encyclical on education. Reading this as part of one of her education classes, she was struck by the words: “. . . the proper end of Christian Education is to cooperate with divine grace in forming the true and perfect Christian.” This idea seeking to be a “true and perfect Christian” appealed to her and she sought to achieve this goal with zeal. A lively, joyful, imaginative bright person by nature, she often voiced concern that somehow these traits were obstacles to a life of holiness. Gradually, she came to understand that
grace builds on nature; it does not set it aside or destroy it. When it became possible to return to her baptismal name, she did so as she felt it was more feminine.

In August 1970, Sister Audrey nearly died from a perforated ulcer. Rushed to the hospital in Petoskey, Michigan, she remained in intensive care for an extended time. Here at the Petoskey Hospital, she experienced the unconditional love and care of hospital personnel, community, friends, family and relatives.

Following her recovery, she returned to Grand Rapids and began ministries in religious education where she served in both Douglas and Weare. Then she moved to the Saginaw area where she worked with the Diocesan Office for Indochinese Refugee Resettlement.

In 1982, Sister Audrey went to the Durham Community, St. Paul, Minnesota for two years of personal growth. From 1985-1998, Sister Audrey worked as secretary/receptionist in the athletic department of Augsburg College, Minneapolis. While in St. Paul, she shared community life at St. Mark’s convent with Sisters from four different communities.

At the time of her Golden Jubilee, Sister Audrey returned to New Mexico and lived with Sister Rita Barreras in the Albuquerque House of Presence – this was a happy reunion of childhood friends after fifty years. Eventually, Sister Audrey’s health required residence at Marywood where she could receive the assistance she needed. Living gracefully while facing the physical challenges of Parkinson’s Disease, she continued to grow in her deep love for God, deriving joy in her friendships and activities at Marywood Heath Center.

Sister Audrey charmed everyone with her wonderful sense of humor, riddles and songs. She even put together a booklet which she entitled, Tickle Your Brain, in which she collected riddles and jokes. Other sources of enjoyment for her were playing the piano, singing, dancing, playing cards, taking walks and swimming.

Through all her experiences, Sister Audrey was learning to see the positive side and to regard obstacles as stepping stones rather than stumbling blocks. At the time of her Golden Jubilee she said: “I give thanks to my God every time I think of you, my Dominican Community, family and friends. You mirror the brightness of the Lord for me. You taught me to courageously step over the cross as a bridge to joyful heights.”

Sister Audrey was grateful to her Dominican Community for helping her become her authentic self. The meaning of life was clear to her: God, self, and others interacting in love. And, when her life on earth came to an end, Sister Audrey believed that God’s grace would guide her on the journey to a new beginning: Life Everlasting!

We commend Sister Audrey to your prayers.