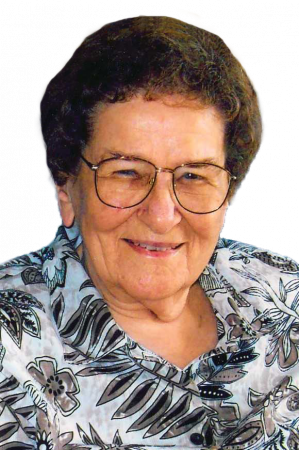 What return shall I make to God for all the good that has been given to me? Psalm 116:12

Mary Kubian, the daughter of John and Katherine Schiba Kubian, grew up in Lampman, Saskatchewan, Canada. She was born July 3, 1917, the fifth of twelve children, and baptized four days later because she was fragile, and was not expected to live. Her parents, both Polish immigrants, were hard working people and devoted Catholics. Mary learned, in her own words, “how to work, to share, to take responsibility, and how to be happy with the simple things of life”.

Dominican Sisters taught summer catechism classes in Lampman and with their influence along with the encouragement of Father Ogle, her pastor, and that of her brother John, the seeds of a vocation were sown. Mary traveled to Grand Rapids in 1933 to enter the Dominican Aspirancy and she completed four years of high school at Marywood Academy. “How the Lord ever called me to be something about which I knew so little, and how I ever got the courage to respond and go to a place so strange and distant from home,” was ever a mystery to Sister Audrey.

After graduation from Marywood in 1937, Mary returned home to Lampman for the summer. The family were so eager to see her that they sold a cow to pay her travel expenses. She laughed when she recalled that the cow, however, had no teeth! Following the summer with her family, she returned to Grand Rapids, entered the postulancy of the Dominican Sisters ~ Grand Rapids and began her studies at Catholic Junior College, the forerunner of Aquinas College.

Mary became a novice on February 16, 1938 and received the name Sister Mary Audrey of the Immaculate Conception. On March 11, 1939 she made her first profession of vows, and her final profession on August 16, 1942. She became a naturalized citizen of the United States in 1946. Reflecting on the event of giving up her Canadian citizenship, she said it “always gave me a lonely feeling.” Just a few days before her death she sang a beautiful rendition of O Canada in her clear soprano voice.

Sister Audrey’s early teaching years were at the junior high level, first at St. Joseph’s, Weare and then at St. Mary’s, Lake Leelanau. In 1945, she began teaching high school and she taught both religion and social studies at St. Mary’s, Carson City; St. Mary’s, Lake Leelanau; Holy Family, Saginaw; Muskegon Catholic Central, and Grand Rapids Catholic Central. She also taught high school in Melville, Saskatchewan, Canada. From 1961 – 1963, Sister Audrey was the principal at St. Mary’s in Saginaw. Then from 1964 – 1971, she was the Supervisor and Director of the Congregation’s schools in Saginaw.

After thirty-six years in the classroom or in the administration of schools, Sister Audrey continued to serve in the field of education as a secretary at St. Thomas the Apostle School in Grand Rapids and then as administrative assistant at Emeritus College (now Osher Lifelong Learning Institute-OLLI) at Aquinas College – a position she held for a total of ten years. In between her stints at Emeritus College she served a five year interlude assisting Sister Rose Callahan with the administration of the Grand Rapids Diocesan Apostolate for people with disabilities.

In 1992, after fifty-two years in the ministry of education, Sister Audrey came home to Marywood where she continued to serve with a calm demeanor and competence in the roles of outreach ministry, hospitality, tutor and prayer.

Her own education, begun in Lampman, Saskatchewan and continued at Marywood Academy, was furthered with a B.A. in Social Studies from Central Michigan University, an M.A. in Education from the University of Notre Dame and a Certificate in Religious Studies from Aquinas College.

On the occasion of her Golden Jubilee in 1988, Sister Audrey reflected: “The years have been happy, richly blessed by God and most rewarding due to the Grace of God and the support of my family, friends and community. To all of these I offer my prayerful thanks.”

Quiet and unassuming, Sister Audrey will be remembered for her generosity, cheerful smile beautiful voice and enjoyment of the simple things in life. She loved to try new things and old recipes. She enjoyed sewing, hiking, reading, listening to music, doing crafts and visiting with family and friends. During the summer of 1978, she accompanied her brother Mike and sister Kay with their families on a European trip. At Brettville in France, they kept a sacred promise by visiting the grave of their brother, Casimir, who was killed in World War II.

After nearly one hundred years of life in service to God’s people, Sister Audrey is able to answer the psalmist’s query: “What return shall I make to God for all the good that has been given to me?” with the answer: I give God my whole life, lived well, lived fully, lived in love.

Sister Audrey is survived by her sister Nettie Cole of Mississauga, Ontario, Canada; sister-in-law(s) Josephine Kubian, Rita Kubian and Doreen Campbell of Regina, Saskatchewan, Canada; many nieces, nephews and friends; and members of her Dominican community.

We commend Sister Audrey to your prayers.