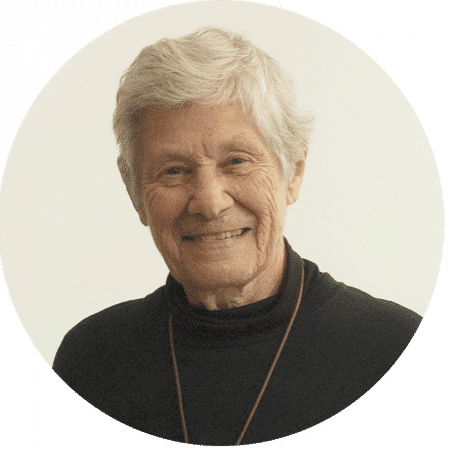 Sister Ardeth Platte was known and loved by many all over the nation and world. When word got out that she had died, Jane Fonda called Carol with condolences. Piper Kerman (Orange is the New Black), who was with her at Danbury Prison, wrote a moving tribute to Sister Ardeth on her Facebook page. Much has been written in other public forums. But here, in this biography, is the gentle, caring Sister Ardeth we knew- always kind and thoughtful, always more interested in asking about you then telling you about herself.

She was born in Lansing, Michigan on April 10, 1936 to Herman and Helen (Simonds) Platte. She and her brother Richard, nearly four years her senior, were close – in part because of their unconventional upbringing.

When Ardeth was two years old, her parents divorced. Her father moved with the children to a tiny town in the Upper Peninsula near Copper Harbor where he found work as a farm hand. Sister Ardeth and her brother recall great adventures in the outdoors: climbing trees, skiing to school in six feet of snow and encountering bears and porcupines along the way.

Her father found it difficult to earn a living in that remote area, so he moved the family to Westphalia to live with his parents when Ardeth was eight. There she attended St. Mary’s Catholic school and received the sacraments. She graduated from high school as the valedictorian of her class in 1953.

Her Dad valued education so there was never any doubt that both children would go to college. Ardeth enrolled at Aquinas College, where she met the Dominican Sisters. In 1954 she entered the congregation and the next year received the name Sister Mary Richardine, later changing back to her baptismal name of Ardeth.

Sister Ardeth loved study. She said it “opened her mind and heart to new horizons.” The events of the 1960s, especially the life of Martin Luther King, Jr., Civil Rights Movement, Chavez and farmworkers, and Vietnam War, impacted her. She grew in the conviction that evil resided in racism, sexism, and militarism. This knowledge, she said, “spirited her into a life dedicated to charity, justice, and peace.”

Sister Ardeth had a long and rewarding career as an educator. She taught at St. Mary’s and Catholic Central, Muskegon; St. Francis, Traverse City; Sacred Heart, Mt. Pleasant; and St. Joseph’s, Saginaw. She relished the opportunity to work with young people in whom she found a font of energy and hope. She was convinced she learned more than the students did.

At St. Joseph’s Saginaw, she served as principal and initiated alternative educational opportunities for dropouts and those seeking a GED. It was here that Sister Ardeth began to see political life as a force that could work for the good of people. She was elected to serve as a City Councilor and later mayor pro tem, advocating for policies that alleviated unnecessary suffering and supported minorities, women, and the poor. Although she truly enjoyed the opportunity to serve through political office, she withdrew in 1985 when Pope John Paul II prohibited elected office in the civic arena for women and men religious.

There followed years of prayer, study, and action to halt the proliferation of and ultimately ban nuclear weapons, which she described as the “taproot of violence in our world.” Her actions meant that she, together with several other Dominican Sisters, most notably her long-time companion, Sr. Carol Gilbert, served lengthy sentences in prison. She experienced the “prison industrial complex [as] a dehumanizing and demoralizing system of domination and slave labor.” She endured shackles and chains, privations, and humiliation in prison, seeing it all as a call to discipleship, and an opportunity to love everyone – prisoners, and corrections personnel alike. She was a calming influence and healing presence to women in the prison and became an advocate for prison reform and restorative justice.

Sister Ardeth felt that both her early years and religious life were sources of her strength. She attributes her strong sense of responsibility and resilience to having grown up without a mother in the home. From her faith-filled father she learned how to live simply and love everyone. Her intuitive ability to “read” people and disarm tension with her gentle and sometimes humorous ways were learned early as she negotiated the expectations and challenges of living with relatives while her father earned a living in several occupations as well as serving in the navy. Religious life, she wrote, taught her to value the disciplines needed to be “one with others, regardless of their race, creed, sexual orientation, social status, political ideology, spiritualty, or crimes.”

Although Sister Ardeth spent most of her ministry years in work outside the traditional realm of the institutional Catholic Church, she lived the soul of the church with every breath she took – walking humbly and faithfully as a disciple of the nonviolent, ever compassionate, always loving Christ.

So, this Ardeth girl has a hammer – of justice, hammering out right relationships among people, our institutions, and our world. This Ardeth woman has a bell – of freedom, the tone of which rings out freedom’s cost – faithful vigilance, moral obedience/civil disobedience. This Ardeth friend has a song that sings out the love between brothers and sisters of any nation who have vision not unlike that of the Christ character whose stories we still tell.

Sister Ardeth died peacefully in her sleep on September 30, 2020. May she who was peace, rest now in peace. May we, who knew and loved her, carry on her legacy, and love one another.

Sister Ardeth is survived by her brother and sister-in-law Richard and Rosemary Platte of Vista, California; nieces, nephews; many friends and members of her Dominican Community.

...As women religious, the Dominican Sisters of Grand Rapids believe all creation including Earth itself to be sacred and we stand in witness of life over death, love over hatred and hope over fear. - DSGR Corporate Stance on Nuclear Disarmament, Nov 2007

We commend Sister Ardeth to your prayers.

Pray for peace and justice education, organizing and non-violent action

“I am going to spend the rest of my life to get the U.S. on board this treaty,” Ardeth Platte, OP, 81, told GSR in an interview at U.N. headquarters shortly after the vote, the culmination of several sets of meetings that began earlier this year.

“We are going to stigmatize and delegitimize nuclear weapons. We can never use them on the planet.” — Ardeth Platte, OP

I pray for PEACE for the world.

“…I had come to believe that the decision to have/use nuclear weapons is the taproot of violence; that nuclear weapons are the ultimate immorality; and that they are aimed against God’s creation.” ~ Ardeth Platte 2008

Sr. Ardeth intercedes for peace at the Brunswick, ME military base.

Let us pray together that the countries of the world work together in a spirit of cooperation, with determination and courage — and take this great step toward peace and security, and safeguarding of life on our Earth. Amen.

“Remember when Bill Clinton said we need to teach our children to use words rather than weapons? At the same time, the US was bombing Bosnia, Serbia, and the countries surrounding. You teach by what you do, not by what you say. The US solves conflict by bombing people,” Platte says. “We live in a culture of violence and a culture of death. Every violence is connected. Nuclear weapons are the taproot of all violence.”

Ardeth Platte, OP, Will Be Remembered as a Prophet of Peace

Banning Nuclear Weapons, A Historic Moment in Our Lives