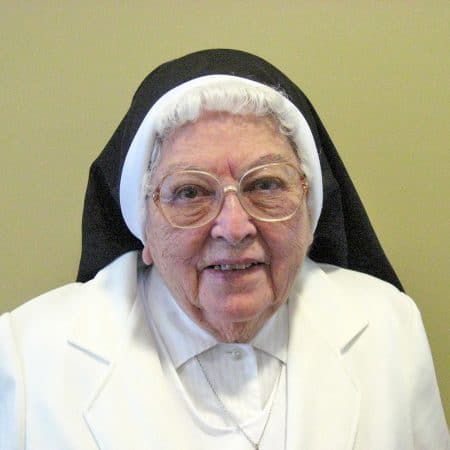 “Always I am most thankful for God’s call to the Dominican vocation. It is the religious experience that integrates prayer and ministry. We share our faith, word and witness with God’s people.”

That is how Sister Antonita Vigil expressed her experience of her first twenty-five years as a Dominican.

She was born December 17, 1922 in Ranchos de Taos, the fifth of eight children of Jose Antonio and Maria Higinia Vigil. At baptism she received the name of Maria Adelina. Until she was in the sixth grade she attended the public school, the only one in town. Then in 1935 the Grand Rapids Dominicans opened St. Francis School, where she was impressed by their prayerfulness, good example, love and care. Before entering she had work experience as a babysitter and in summer jobs away from home.

In September 1938 Maria Adelina entered Marywood as a postulant under the direction of Sister M. Fabian. At reception she took the diminutive form of the name of her father and one of her brothers.

Besides her culinary work in various locations, Sister Antonita served as a Eucharistic minister, CCD teacher, hospital visitor, and in literacy programs. She was grateful to the congregation for providing the atmosphere of prayerful occasions: annual retreats, days of recollection and enrichment, Jubilees, and Area meetings. Short in stature and private in disposition, she went quietly about her duties. Her hobbies included making rosaries, knitting, canvas crocheting, reading, and crossword puzzles. She loved to reflect on the greatness of God’s creation. When in Grand Rapids she liked to take classes in the Emeritus program at Aquinas College.

In an illustrated article in the National Catholic Reporter (July 15, 1988) she is shown assisting Sisters Marybride Ryan and Angelina Abeyta turning a patch of sandy dirt into a patch of green with vegetables and a little patio. Her traveling was mostly in the United States, but in August 1996 she was one of four Grand Rapids Dominicans making the Parable Pilgrimage to the Lands of Dominic. In 1998 Sister Antonita moved to Encino House in Albuquerque and began a ministry of presence at St. Joseph Hospital.

Her love for her home state of New Mexico inspired her to write poetry about nature and her beautiful state.

Summer in Peñasco
Jicarita Peak is covered with snow.
My Jicarita Mountain –
Part of my soul.

The quotation she chose for her Diamond Jubilee sums up her outlook: “For just as in one body we have many members, yet all members have not the same function, so we, the many, are one body in Christ.” (Romans 12:4) During the August days of 2001 she composed the following “epitaph”:

Was a faithful
Person to God and God’s people
So be it.
Amen. Amen.

She is remembered as one who knew everyone’s name and always being so happy when greeting everyone. Now our God is greeting her with that same happiness she extended to all; she is resting in God’s loving embrace.

Sr. Antonita is survived by nieces, nephews, many friends and members of her Dominican Community.

We commend Sister Antonita to your prayers.

Prayer for the poor, sick, and homeless All year Sister Antonita Vigil knits. Her hands fly as she turns out hats that will be gifted to the Santa Claus Girls for boys and girls in Kent County. She is joined by many more Sisters in this labor of love.

Sister Antonita Vigil with members of the 70-Year Jubilarian Class in 2009 at Marywood.