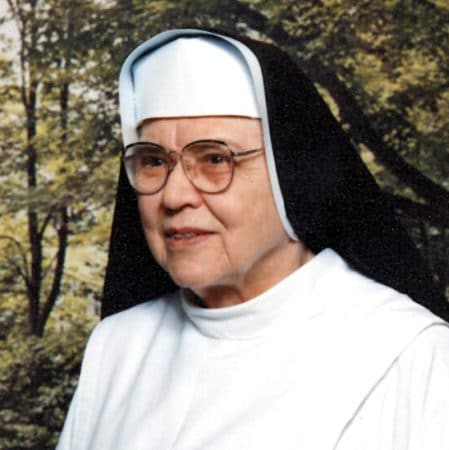 “How good God is to Israel! I am Israel…each soul is.” So Sister Anthony Therese mused in later life upon the mysterious ways her Creator had carried her—through darkness and light, loneliness and embrace, joy and sorrow, desire and fear, firm in her roots, daring in her future—an ageless child. “Just yesterday I was a child turning somersaults, and still doing so as a novice on the roof garden. Now I am an old lady who at times finds it hard to walk three doors to church. These physical changes are like squalls on the sea. Deep down, I am happy and at peace.”

Anna Pacek was the second child of Andrew and Josephine Kubik Pacek, following the first who was a stillborn daughter. Anna was born on January 27, 1915 in a one-room trailer bordering a sugar beet field in Albee Township, Saginaw County. When she was barely a year old, they moved into a rented house in time for little Joseph to be born. A couple of years later, joy and sorrow visited the family, when her mother gave birth to a daughter to whom she gave the name Josephine. In the evening of the following day, the young mother kissed her new baby goodbye, and gave her to Anna’s godmother – and died. Andrew kept his little son, but relinquished his two little daughters to Philip and Mary Borienik’s care. Inside the home was warmth and love; outside were fields and its creatures, Anna’s first love. But the days of carefree somersaults and chasing butterflies were abruptly ended, when her father remarried and reclaimed his daughters bringing them to his new home in Brant. Her stepmother, though well-intentioned, was from the old country in Czechoslovakia, and knew little English or American ways with children.

Bewildered and confused, Anna sought refuge in her little friends in Nature. An abandoned family of kittens, orphaned baby squirrels, baby birds fallen to the ground, even the field mice became her charges. From the little she knew of God, she realized these were God’s gifts to her in need. Her First Communion at St. Mary’s Parish in nearby St. Charles was followed immediately after Mass by Confirmation—so sudden after a week’s hurried instruction, so swift and almost strange these signs of God. From Sunday to Sunday she wondered about the Sisters she saw from a distance at Mass. One Sunday, she rapped at the convent door. Sister Thomas Francis O’Rourke smiled at her naiveté, but gave her a copy of the autobiography of the Little Flower. Another day she chanced upon a copy of the Baltimore Catechism lying in the road, and that too she studied word by word. Intrigued by this mystery called religion, she entered upon a self-guided regimen of fasting, prayer and solitude. Employment in Chesaning brought her under some guidance from Father Aloysius Studer and Sister Agnes Marie Flohe. The latter introduced her to Sister Jerome Smithers who was recruiting for the Aspirancy. With Sister Jerome’s persuasion, her father consented to her leaving for this strange venture. On March 7, 1931, she arrived at Marywood in time for Benediction. God’s world opened up to her, and she joined in the prayer so loudly that the Sister behind her poked her and advised her to tone down.

It was a strange world. With extra tutoring to complete high school, she joined her classmates as a postulant in September 1934. On August 27, 1935, Mother Eveline Mackey gave her the Dominican habit and the name Sister Anthony Therese of the Holy Eucharist. With another year of study, she made her first profession to Mother Euphrasia Sullivan on August 5, 1937. When she ventured the suggestion of nursing, Sister Leonora put that to rest in mock horror, “Heavens no, child. You would kill your patients with kindness.” To which, she replied, “What better way could they die?” Only in later life, would she tend to both body and soul.

Meanwhile, classrooms in Michigan and New Mexico awaited her. Without a worry, she enlivened the execution of her lesson plans with her forest friends. Many were the tales of her tending animals in the classroom and yes—convent. How she managed to ship a young burro from New Mexico to Michigan via baggage car is still a tale worth telling. She delighted her pupils and mystified her peers. She was a mix of St. Francis, Martin de Porres and Doctor Doolittle. Dedicated to total excellence, her paramount interest went naturally to her goals for Catholic education. She spent 34 years in primary education. She was well prepared with advanced work beyond her BA in Liberal Arts and her MA in Theology. With particular memory of her own First Communion, she rejoiced in preparing each child to receive Jesus.

Years of teaching little ones were followed in 1972 by years of pastoral ministry to the elderly in various Florida parishes. “Love is in the doing. Love is in the hands,” she philosophized about all her activities. Self-appointed and self-trained in many respects, she dared local politics to set up needed services. The mystery of suffering and healing captured her spiritually, while she was experiencing the spending and ebbing of her own life. Conceding to the criticism that she was work-oriented, she wrote, “No matter for this short life. Heaven will be long, and by God’s mercy, I hope to be with all of you forever.” In 1986, she returned to Michigan. Never able to accept the reforms of Vatican Council II, Sister found ministry in Mancelona where she joined a parish that suited her in its adherence to the older traditional ways. Finally, declining health brought her home to Marywood Health Center where she spent her last years in prayer, song and stories, as well as an occasional feeding of whatever wild animal chanced past her window.

On August 14, 2012 Jesus came for her. We commend her to God’s love, and expect she will spend her heaven doing what she admitted doing best; nurturing all of creation.

Sister Anthony Therese is survived by her sister-in-law Rose Pacek in Florida; nieces and nephews, many friends and members of her Dominican community.

We commend Sister Anthony Therese to your prayers.

Sister Anthony with several squirrels in 1971