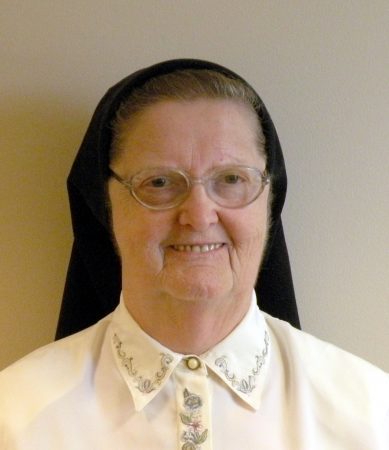 The melodious sounds of Della Irene Shalda were first heard on August 26, 1943 in Maple City, Michigan. Her parents, Lawrence and Lelah, welcomed their first child into their home and into the Catholic Church through Baptism at St. Philip Neri parish in Empire, Michigan. The family grew to include three brothers and two sisters.

Della entered the Grand Rapids Dominican Congregation on September 8, 1961 and took the name Sr. Anne Monica of the Little Flower at her Reception. She made first vows on May 31, 1963 and final profession August 15, 1968.

During the time of her Silver Jubilee in 1987, Sister reflected, “Since I was raised in a rural area with no Catholic school, part of my early formal religious education came through the mail from “Sister Mary” who was my first contact with the Dominican Sisters. Later the Sisters came for two weeks each summer for catechism classes. At some point during those classes the seed of a vocation was planted.” The Dominican Sisters ~ Grand Rapids were fortunate to have that small seed ripen into a vocation as a Sister who served well in many different capacities, nourished by faith.

Sister Anne Monica’s early years as a Dominican Sister were spent in food service ministry until she earned a B.A. from Aquinas College in 1974 and began her ministry as an educator. Middle school children were her favored classes, especially in Traverse City. Not long after her ten years as a teacher, Sister Anne Monica’s teaching ministry blossomed into directing Religious Education programs at St. John Baptist, Alpena and Guardian Angels, Manistee.

The color green best described her years of ministry: “the color of hope, sign of spring, new life.”

She overcame some of her shyness by appearing before the Manistee Planning Commission and expressing “grave concerns” about building a 425-megawatt power plant in the city. In keeping with the Dominican Sisters’ stance on Care of the Earth, she voiced her belief: “We need to take responsible action to avoid the possibility of serious and irreversible environmental harm, so that when we look at our world, we can say, like God said in the Book of Genesis, ‘It is good.’”

Sister Anne Monica’s last ministry assignment upon her return to Grand Rapids in 2007 was as a pastoral volunteer at Blessed Sacrament Parish. She so loved visiting parishioners in their homes and bringing them Communion and comfort and song. In return, those she visited were deeply appreciative of her companionship and dedication to them. Prayer and socializing with other volunteers and parishioners at Blessed Sacrament was a special weekly gathering for her.

Her many interests included music, art and cooking. And song was her special gift to our many Congregational gatherings. She hit the high notes with a clarity and beauty that touched many a heart. The sounds of music continued to be heard when she became a member of the Aquinata Hall community during the last years of her life.

We trust that our Sister Anne Monica adds a joyful soprano voice to the choir of Angels in her new ministry in the communion of saints.

Sister Anne Monica Shalda is survived by her sister Monica (Chad) Evans of Honor, MI; her brothers Larry Shalda of Muskegon, MI; Len Shalda of Empire, MI; and Louis (Carmen) Shalda of Rockford, MI; Mary Louise Graham of N. Muskegon, MI (close family connection); many good friends she met throughout her years of ministry; and by her Dominican Sisters.

We commend Sister Anne Monica to your prayers