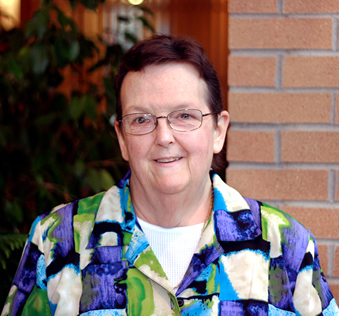 Just to be is a blessing. Just to live is holy. -- Rabbi A.J. Heschel

Born August 7, 1941, Mabel Ann was the only daughter among the five children of Jules Michael and Mary Aleen Polack Norman who were living in Kalamazoo, Michigan at the time of her birth. Two brothers preceded her in birth order and two others followed: James (Jim), John, Lawrence (Larry) and Ronald (Ron). A subsequent move to Grand Rapids resulted in her elementary education at St. Stephen’s School followed by graduation from high school at Marywood Academy in 1959.

Mabel Ann entered the community in 1959 and received the name Sister James Michael of the Child Jesus on the occasion of her reception into the Congregation. She later returned to her middle name, Ann, given to her at Baptism. Recalling her decision to enter the Congregation, Sr. Ann reflected: “When I packed my bags and left home to become a Sister little did I realize that only much, much later would I understand the Lord’s call to actually be an extension of the journey begun in Baptism, a journey sometimes wonderful, other times frightening, yet filled with opportunities for growing personally and spiritually.”

At Aquinas College she earned a Bachelor’s in Music Education, with minors in French and piano. Later Sister Ann did graduate level studies in the French language at Laval University in Quebec, Canada. Additional studies included a summer choral workshop in Delaware Water Gap, Pennsylvania; the method she learned there was that of Fred Waring and she shared it with enthusiasm when she returned to teach in the fall. She enjoyed a sabbatical year at the Franciscan Sisters’ Wholistic Growth Program in Little Falls, Minnesota in 1993.

In Michigan, Sister Ann served in Sacred Heart School in Mount Pleasant, St. Francis in Traverse City and Guardian Angels in Manistee. She also served in the role of Marywood Administrator/Common Life Coordinator at two different periods in her life. First she served as Marywood Administrator from 1979 to 1981. Then after twelve years in parish ministry, seven at St. Clement Parish in Boonville, Indiana as director of liturgy and music and as a pastoral minister, she again served as Marywood Common Life Coordinator from 1994 to 2006. During this time, she also volunteered with The Salvation Army receiving a Certificate of Appreciation in 1995 in recognition of her outstanding voluntary services to others.

Sister Ann’s gifts in music, administration, teaching and “people” skills were always deeply appreciated in her service as director of liturgical music, pastoral minister, teacher of music, choir, piano and French throughout schools and parishes in Michigan and Indiana.

After many years in these role, Sister Ann studied wholistic health practices, gaining certificates in Reiki Therapy, Therapeutic Massage, Cranio-Sacral Therapy and Healing Touch. Many benefited from her skilled and compassionate healing ministry during the years that followed.

Sister Ann continued to serve in support services at the Marywood Health Center, as cantor at Dominican Chapel/Marywood and as tutor in the W.O.R.D. program. One of her later ministries was the direction of the hand bell choir at Marywood – a position she enjoyed. Her bell ringers were most appreciative of her patience, humor and teaching skills as they made beautiful music together for festive occasions.

On the occasion of her Golden Jubilee in 2010, Sister Ann expressed her gratitude to God, family and her Dominican Community, friends all who had encouraged and supported her throughout her life’s journey.

Sister Ann’s hobbies included sewing, golf, playing cards and taking long walks along beautiful trails in woods or near water. She was also an excellent gourmet cook and as a special treat often organized a crew of Sisters and staff to make the most delicious caramel corn in the world for the celebration of the Feast of St. Nicholas. Sister Ann will be remembered for her warmth, gracious hospitality and ready smile. She will be greatly missed.

Sister Ann Norman on the left and Sister Judith Burns as postulants.

Reception of Sister Ann Norman’s profession at Marywood in 1969.

Sister Ann is playing the guitar for the Sunday Assembly at Marywood Chapel in 1990. Sister Ann used music throughout her career as a choir director, cantor and hand bell director. If this post is previewed, it cuts off the top of her head.