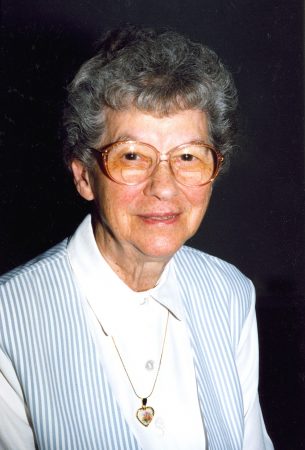 “I am a coal miner’s daughter from Saginaw.”

So began the reflections of Sister Ann Kostrzewa on the occasion of her Golden Jubilee. She did not mention that ten years previously at a workshop on Polish Heritage at Orchard Lake, an archivist had traced her family heritage back to 15th century Polish nobility. Her true nobility came as a faithful daughter of God and Dominic.

Born July 1, 1915, Anna was one of 10 children of Polish immigrants, Stanley and Mary Grzesiak Kostrzewa. Her earliest memories were of her father returning after a long day at work, and in the evening singing Polish songs and church hymns in a strong, tender voice. But tragedy struck when she was four. Her father was crushed in a mine cave-in.

Her mother, left to support nine children – one had died in infancy – in a home without electricity, plumbing, or telephone, relied on God and the Virgin Mary and kept the family together. The older children helped take care of the younger and as soon as they were old enough went to work. Only the two youngest graduated from high school.

Anna completed grade school with the Grand Rapids Dominicans at St. Rita’s and with guidance from Sister Theodora entered the aspirancy at Marywood. In 1934, while a postulant, she taught first and second grades at St. Alphonsus School, Grand Rapids. Then she was received as a novice and given the name Sister Martin Porres of St. Rose, which she kept until returning to Ann in the 1970’s. A highlight of her religious life was her first profession on August 5, 1937. “No bride could have matched the joy I experienced that day.”

For 47 years she taught primary grades at St. Joseph and St. Alphonsus, Grand Rapids; Our Lady of Grace, Dearborn Heights; St. Basil, South Haven; St. Casimir, Saginaw; St. Mary, Charlevoix, where she was also the principal; and St. Mary Magdalen, Melvindale. She was an excellent teacher, loved and respected by her first and second graders—and their parents.

Through summer study she earned a B.S. in Education, an M.A. in Theology from Aquinas College; and an M.A. in Educational Administration from Central Michigan University. In 1980 she studied the Polish language at the Jagiellonian Institute at the University of Krakow. After Vatican II she updated her religious education by attending workshops at Madonna and St. Norbert’s colleges and seminars at Aquinas.

As principal in Charlevoix, Sister Ann introduced using television in teaching, upgraded school facilities, and sought funding for remedial reading and libraries. She inaugurated a program to involve parents in preparing their children for first communion. Hearing loss resulted in a change of ministry. She went to Sacred Heart, Merrill in 1983 as a volunteer pastoral minister, working with senior citizens and the home-bound. Then she launched out into the BeFriender Program. After taking the classes herself, she trained a group of parishioners to be leaders. By the time she left Merrill, the program was strong and ably run by lay leadership. She also started a senior group who met regularly for different activities. They, too, are still flourishing.

At one point in her life Sister Ann had suffered a temporary loss of inner joy in the Lord’s presence. Then through the Charismatic movement she regained it. “My drooping faith grew through study of scripture, meditation and sharing.” Attending the International Charismatic Conference in Rome in 1975, she heard Pope Paul bless and encourage the work of charismatic prayer groups. She formed the first such group at St. Casimir’s, Saginaw, and played her guitar with the music ministry.

Living with Sister Ann was a delight. She was self-effacing and shy, but a loyal friend who gave of herself completely to help others. She liked to play the guitar for relaxation, “because it keeps me young and it keeps me in touch with the young.” Other hobbies and interests were driving, cooking, and sewing. Her travels included a tour of California and New Mexico with four other Sisters (1973); a Golden Jubilee trip out east with a visit to relatives on Cape Cod (1986); and a trip to Hawaii at the invitation of a cousin (1990).

When Sister Ann retired to Marywood she was active in volunteer ministries. Her teaching continued as a tutor of adults in the WORD ESL program. Here Sister Ann enjoyed teaching adults to learn the English language and to prepare them for citizenship. She always studied a few words of the language of the student she was tutoring. She knew the sweetness of the sound of one’s mother tongue when she was a stranger in a foreign land.

On July 12, early in the morning, Sister Ann heard a voice familiar to her. It was the sweet sound of the God she knew so well, calling her to eternal life, calling her home.

Sister Ann is survived by nieces, nephews, friends and Sisters in her Dominican Community.

Sister Ann as a teacher at St. Basil School in South Haven, Michigan with her class of first graders in 1961