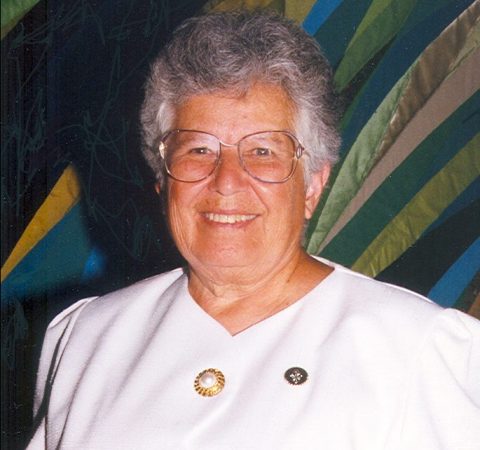 You left all to follow Christ. You now possess eternal life. Alleluia!

Sister Angelina was born in the small town of Abeytas, New Mexico on February 21, 1923. The name of the town was derived from her family name, and her grandparents were religious leaders and respected citizens in the town. From this beginning she acquired a deep and strong religious and cultural respect for life. Her parents, Santiago and Andrea Sanchez Abeyta, had nine children, seven girls and two boys. Valentina (later Angelina) was the eldest and Dolores, who also became a Grand Rapids Dominican Sister, was the second youngest. At the age of three, little Valentina suffered severe burns from a tub of hot water which fell on her; she was not expected to live. Her mother asked God to save her and allow her to serve in religious life. Her mother’s first prayer was answered when little Valentina healed from her burns and thrived.

The first twelve years of Valentina’s education were in public schools. Religious education came through the family’s devotions, especially her grandfather’s leadership in the community as well as through the two week summer school in catechesis taught by the Victory Noll Sisters. Later when the family moved to the city of Belen, Valentina observed the Dominican Sisters at Mass. It was here that her vocation took root. After two years she garnered the courage to approach one of the Sisters. Then in no time at all, she was on the train to Grand Rapids to enter the Congregation as a postulant on June 2, 1943. Her mother’s second prayer was now answered.

Her dream to return to her beloved land in the southwest was fulfilled in 1966 when she was assigned to teach and later to be the coordinator of religious education at San Juan Pueblo in New Mexico. In 1977, after an interval as the religious education coordinator in Douglas, Michigan, she became Mission Office Coordinator and pastoral minister for the Archdiocese of Santa Fe in Albuquerque. In this work she also assisted in the development of Christian Basic Communities.

Next Sister Angelina moved to Amarillo, Texas to work as research director for the Ministry Resource Center, an innovative collaboration of several U.S. congregations of both Women and Men Religious, to meet the needs of underserved peoples in poor, rural areas of the southwest. She had always desired to work with the rural poor. In this leadership role, she helped others expand their skills and horizons to serve in great numbers as she coordinated the efforts of twenty-eight congregations. Perhaps her early years as the oldest child in a large family in a small village gave her the skills and gifts to negotiate the challenges of – and to see the potential in – communities that cooperate with one another.

While ministering in the southwest, Sister Angelina became involved in solidarity work for Central America. As part of an ecumenical group, she helped sponsor conferences, vigils, and non-violent protests. She also aided refugees from Central America and learned first-hand of the many hardships and dangers they faced. In Amarillo, she joined peaceful protesters who stood vigil as the train that carried nuclear weapons from the local Pantex plant moved through towns and cities. “We stand very much alone, but continue to give witness,” she wrote in 1986.

When the Congregation developed a direction statement to stand with women and children, another avenue of service opened up for Sister Angelina. After many months of meetings and conversations, the dream of a center to assist women and children at the El Paso/Ciudad Juarez border emerged. With the financial help of member congregations of the Leadership Conference of Women Religious, this dream became a reality with the opening of Centro Mujeres de la Esperanza in 1990. Sister Angelina and an Adrian Dominican, Sister Donna Kustsch, were its first co-directors, pioneering an organized supportive presence at the border with women and their children, some HIV/AIDS positive, all underserved. By 1995 the Center had grown, been incorporated in the State of Texas and established its first board of directors. With its future secure, Sister Angelina was ready to move on. Now after more than twenty years, the Center continues to serve the needs of women at the border, with broad and deep supportive presence.

Establishing houses of presence, prayer and hospitality was another dream of the Congregation. In 1997, Sister Angelina became one of the founders of the Adams Street house in Albuquerque. Here Sister Angelina’s particular gifts as a community builder were greatly appreciated. She lived fully her Dominican life of prayer, study, community and service with other Sisters. She came to Marywood in 2006, where she continued her ministry as gentle woman, compassionate prayer partner on the Prayer and Listening Line, Hispanic services volunteer and dear friend to all she met.

We commend Sister Angelina to your prayers.

Gifts of the Spirit