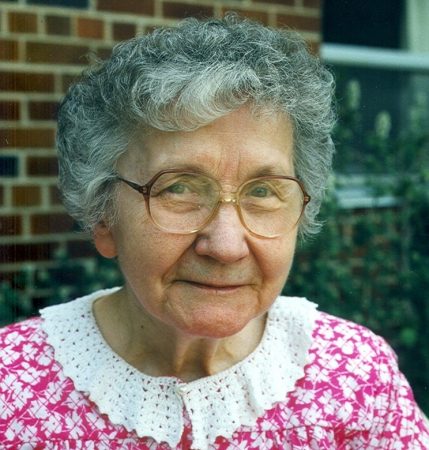 “The Lord is my shepherd” was the favorite Psalm of Sister Angele Richard, gentle as a lamb and docile to the call.

She was born in Plamondon, Alberta, Canada, February 25, 1919, the first girl in a family of twelve children of Louis and Lucy St. Jean Richard. She was baptized Estelle Eloise. When she was three the family moved to Lac La Biche, where she attended the public school and completed eight grades.

At that point her education was halted. Twins, Denis and Denise, were born (ninth and tenth of the family). Her mother’s health was not good and her father could not afford hired help. So at the age of 14, Estelle remained home as her mother’s assistant. To compensate in part for the secondary education she was missing, she was given music lessons and enjoyed playing the piano.

Estelle became acquainted with the Grand Rapids Dominicans when the Plamondon Sisters, Anna and Dominic Marie visited their family. Sister Anna encouraged Estelle to become a Sister and corresponded with her. “Going so far from home and leaving the family was more than I could do but the good Lord didn’t take that for an excuse.” The thought persisted and at the age of 20 she left home.

It was August 28, 1939. The evening before at a farewell gathering the topic of conversation had been the impending war. Her father had said, “If we were at war, I would discourage her from going.” After she had been on the train about eight hours, the conductor went through the cars announcing, “War has just been declared.” She kept on going and at Melville met Sister Agnes Dominic Roberge, who traveled with her to Grand Rapids. One family member whom she never again saw was her brother Edgar, who was drafted and killed in battle in France, August 14, 1944. She was saddened by his death until in a dream she saw Edgar peacefully rowing a boat on the lake at home.

Estelle enjoyed her postulancy under Sister Leonora Gallagher, but there were painful moments. Her novice cousin, Sister Karen Thoreson, kept dutifully to the custom of mortification of the eyes. Until she learned about this form of penance, Estelle felt rejected by one of her family. She was received as a novice, with the name Sister Mary Angele of Mary of Mt. Carmel. A week after her profession, August 1941, she was sent to Beal City in charge of food service. Leaving the novitiate and her classmates was like leaving home again, but the superior, Sister Gerald Grace, soon made her feel at home. While she was in Beal City her parents came to visit her, their first return to the land of their birth.

This ministry was interrupted for two years, 1947-49, when she returned home to care for her mother. In 1976 she was again on a family apostolate in Alberta. In 1985 she began working at Aquinata Hall, assisting in patient care. When she was unable to continue in this service she assisted with sacristy work at Marywood. Failing health necessitated her moving to Aquinata Hall in 1998.

“Angel,” as she was fondly called, worked hard and smilingly, always in the divine presence. One who lived with her called her a living illustration of the Beatitudes. She persevered in anything she was given to do, but always concealed a hurt that she had never completed her education. Diminutive, quiet, always willing to assist, Sister Angele lived up to her name. She valued daily Mass, yearly retreat, community prayers and celebrations of Christmas and feast days. She was grateful that the Congregation allowed her frequent home visits to keep in close contact with a large extended family. Her hobbies were crocheting, knitting, reading, and playing the piano.

Sr. Angele is survived by her sisters Rita Turgeon, Marcelle and Philip Patry and Yvette and Leo Laventure of Alberta, Canada; Denise and Carol Guyon of Ontario, Canada; her brothers Leo, Marcelle, Alcide, Denis and Ida of Alberta, Canada and Urban and Carol of Victoria, British Columbia, Canada; nieces, nephews, many friends and a loving Community.

We commend Sister Angele to your prayers.