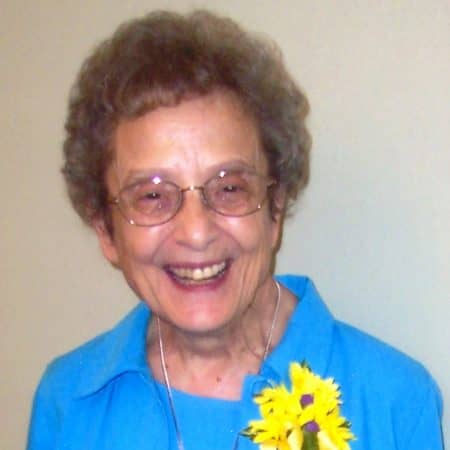 Sister Amata Fabbro answered that question when she responded: “I found hundreds of them when I became a Grand Rapids Dominican. Sharing my life and teaching ministry with such women is a joy.”

Mary Margaret Fabbro, born in Grand Rapids August 20, 1928, was the first of four children of Andrew and Margaret Parente Fabbro. Her father, a native of Fruili in northern Italy, had come to America with his older brother Peter at the age of 14 and lived with his sister Mary in Detroit. Her mother was the daughter of immigrants from Naples, Italy. So her heritage embraced both northern and southern Italy. Her family was deeply religious, possessing that touch of Italian realism that saved them from being simply pious. Her parents instilled in her respect for learning and a desire for the education they were never able to have themselves.

Mary Margaret had one sister, Lucille (for a short time she was in the congregation as Sister Benjamin) and two brothers, Arthur and Andrew (“Skip”). Their home was in a neighborhood where other Italian immigrants lived. The parish church was important and the pastor, Father Salvatore Cianci, exerted a strong influence with his pastoral zeal, love of learning, great charity, encouragement – and his delight in his dogs, cigars, and homemade wine.

Mary Margaret attended Sheldon public school until the fourth grade, when she transferred to Our Lady of Sorrows. There she found role models in her Dominican teachers: Sisters Samuel (Margaret) Schafer, and Vincent Ferrer Rasch. For high school she received a scholarship to Marywood Academy and met other strong influences in Sisters Aline, Ann Therese, Virgil, and Conrad as well as the chaplain, Father Charles Pius Wilson. During her high school years, she worked in Loveland’s Drug Store and in summers she picked cherries and pruned peach trees at Cargill Orchards.

On September 8, 1946 Mary Margaret entered the Congregation at Marywood. Her postulant mistress, Sister Leonora, chose her religious name: Amata, which means “the loved one.” She spent the rest of her life living up to that name. After a year of canonical novitiate she and the others in her class were sent out on mission. “So I was catapulted into teaching about two weeks after my twentieth birthday,” she recalled. The sisters at SS. Peter & Paul, Saginaw, especially Sisters Jeanne Anne Brunett and Rose Miriam Visner, gave her valuable advice and told her she was a born teacher – and she discovered that they were right.

Sister Amata’s assignments took her to elementary schools from 1948-1957 and to high schools from 1958-1964. She met each challenge, including math and science classes. She enjoyed an easy rapport with her students and felt strongly that education empowered them.

She received her Bachelor of Arts degree and Certificate in Theology from Aquinas College. After two years’ leave for study at St. Mary’s College in Notre Dame, Indiana she earned master’s and doctorate degrees in Sacred Doctrine, finishing in 1967. She did post-graduate work at the Universities of Notre Dame and San Francisco.

In 1967 Sister Amata joined the faculty of Aquinas College, where she specialized in teaching classes in Scripture. In addition to her regular teaching load she taught in the Aquinas Institute of Religious Studies (AIRS). She became a full professor and in 1987 chairperson of the Department of Religious Studies at Aquinas College, where her influence as a teacher of Scripture was immense. She also helped initiate and guide the Charismatic Renewal in Grand Rapids. From her participation she gained a deeper realization of the Triune God, the work of the Holy Spirit, and an appreciation for other religious traditions. She later formed a deep friendship with Rabbi Albert Lewis of Temple Emmanuel and spent many hours walking and talking with him.

Although she did not consider herself a “rabid feminist” and never openly advocated sweeping changes in the church, Sister Amata challenged women students to grow, to develop their theological skills and their spiritual and intellectual gifts, and to prepare themselves to serve the church. In 1985 she read a paper on “Women in the Ministerial Priesthood” at the Ahavas Israel Interreligious Symposium. She frequently contributed articles to Rapport and the Western Michigan Catholic. She honored many invitations from different parts of the USA and Europe to give talks and workshops on the role of the Holy Spirit today, Scripture and ecumenical issues.

Although Sister Amata’s own health was frail, she continued as a valiant woman to teach and direct the Department of Theology at Aquinas College during the early years of the 21st century.

She made extensive use of library facilities and required her students to do so. In recognition of this the library gave an annual Sister Amata Fabbro Award to a faculty member. In 2006 Aquinas College recognized her work at the college and in the diocese by awarding her an honorary Doctor of Theology degree.

Sister Amata’s hobbies and interests included reading (especially detective stories and biographies), walking, swimming, needlepoint, crewel stitchery, knitting, crocheting and gardening. Dogs played a role in her life. She loved to watch family pets play and rest, ask for little and give much. When her sister Lucy developed an illness that required assisted living, Sister Amata moved into her home to care for her. After Lucy’s death in 2009, she moved back to Marywood.

After she retired Sister Amata continued to offer Bible study at Blessed Sacrament parish and at the Marywood Health Center.

We commend Sister Amata to your prayers.