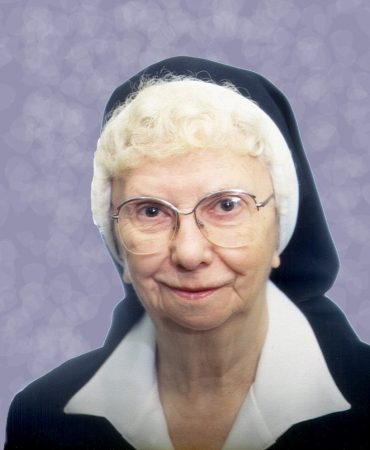 For Sister Agnes Thiel, “the BEST is yet to be.”

Woman for all seasons! There were lots of names for her – “storybook nun,” “heart of gold with spine of stainless steel,” “Sister Senior Power” and on and on — accolades for boundless service to God’s people. It really tickled her when they dubbed her “Go-Go Lady.” To us, her Sisters, she was a paramount community woman, Dominican teacher of youth; and, most recently, pioneer to the Third Age. “The road less traveled” beckoned her to new adventure down unwalked paths and this choice “made all the difference.”

Honorine Agnes Thiel, daughter of Frank and Edna King Thiel, was born October 2, 1909 in a simple windswept house built around the log cabin of the King settlers atop a Lake Michigan bluff south of Ludington. To this day the site is known as King’s Canyon. Honorine was baptized at St. Simon’s Church. At the age of two the family moved into Ludington. They moved again when she was five, this time to Saginaw, where she was promptly enrolled in St. Joseph School. Her twelve-years of education with the Dominican Sisters impressed her with their love of learning and their mission to teach. She remembers herself as being of a quiet disposition, easily satisfied with a growing love of books and study. Throughout high school she worked Saturdays and vacations at various department stores. The regular summer excursions back to Ludington made for lifetime memories.

Honorine entered the novitiate at Marywood, September 9, 1927. A year later on August 28, 1929 Mother Eveline Mackey gave her the habit and the name Sister Agnes Clare of St. Joseph. Professed two years later on August 29, 1930 the neophyte educator had already tested her missionary mettle in a stint as a substitute teacher on Beaver Island. No sign of the far distant future loomed ahead in the succession of teaching and administrative posts which took her from Marinette, Wisconsin to St. Joseph, Bay City, again to Beaver Island, the schools of Saginaw valley and Alpena Catholic Central. She was a well prepared teacher and an able administrator with a breadth of vision and reputation for justice.

With a desire for continual learning she pursued an M.A. from Notre Dame followed by a Master’s in Religious Education and a degree of Education Specialist. Seventeen years of high school teaching coupled with twenty-three of administration made her a natural choice for high school supervision and Director of Schools in the Saginaw Diocese a position she took and held for years.

In 1973 the roads diverged and Sister Agnes Clare accepted an appointment to a Marywood community post on Life to Life and began carrying the torch for senior citizens. Her work within the community became the springboard to what would make her name synonymous with senior leadership in Kent County, on the state level and nationally. She became a very busy woman, answering every call for assistance in the pressing needs of an aging population. In 1974 at the invitation of Doctor Norbert Hruby, President of Aquinas College, she set up and became the first Director of the Emeritus Program at Aquinas. The public arena was at her door.

In 1979 Sister Agnes became the chairperson for the Area Agency on Aging of Western Michigan. Afire with enthusiasm from attending the 1981 White House Conference on Aging, she came home to develop the Senior Citizen Senate of Kent County. Best known perhaps was Sister’s leadership in co-founding and chairing the state’s annual Senior Power Day. Possessed with a gift for recognizing potential, she sought out fresh talent in the pursuit of solutions to the problems of the aging. Their needs were not remote to her. She might have said with Robert Browning, “Grow old along with me; the best is yet to be.”

Recognition was forthcoming. In 1987 she was named Distinguished American Older Volunteer by the National Association for the Aging. In the realm of education, Aquinas College honored her in 1988 as Outstanding Alumna. In 1990 Sister became the first recipient of the Senior Services Award from Blue Cross and Blue Shield of Michigan, a tribute to the memory of the late Senator Claude Pepper. In 1991 the Citizens Insurance Company named her Concerned Citizen of the Year. From the Saginaw Diocese, her impact on Catholic education from her early student days to her work for the Diocese was acknowledged by her induction in 1991 into the Nouvel Hall of Fame.

Years grew gracefully upon Sister Agnes. Bolstered with the technology of her Walkman and pedometer, her brisk morning walk greeted the dawn on her way to morning liturgy. Her presence at table meant a lively conversation, particularly as she welcomed a visitor or Sister from a mission. The meticulous planning of earlier teaching days found new expression in her competent handling of room reservations as guest mistress at Marywood.

Surely she heard her God say, “I have called you by your name. YOU ARE MINE!” Why shouldn’t we say, “GO-GO-LADY!” Until we meet again.

Sister Agnes is survived by several nieces, nephews, grand-nieces and grand-nephews, many friends and a loving Dominican Community.

We commend Sister Agnes to your prayers.

In 1979 Sister Agnes became the chairperson for the Area Agency on Aging of Western Michigan. Afire with enthusiasm from attending the 1981 White House Conference on Aging, she came home to develop the Senior Citizen Senate of Kent County. Best known perhaps was Sister’s leadership in co-founding and chairing the state’s annual Senior Power Day. Senior Leadership Grand Rapids originally began as the brainchild of Dominican Sister Agnes Thiel as an off-shoot of Leadership Grand Rapids, a program of the Grand Rapids Area Chamber of Commerce. It was created with the mission to develop and empower mature adults to assume new leadership roles that contribute to the well-being of the community. http://www.wzzm13.com/video/life/wellness/senior-wellness-maximizing-your-talents/69-8065209?jwsource=cl