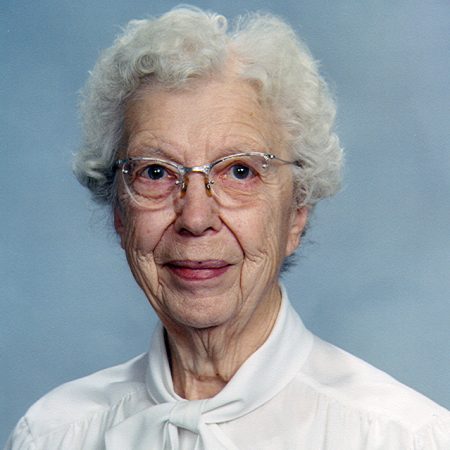 Always her goal in teaching was the same: “to help students better develop their gifts in order to enrich their own lives and the lives of others.”

The beginning of life for Ruth Marie Adelman was tenuous: she weighed less than two pounds when she was born on November 25, 1919. Her maternal grandmother baptized her immediately, expecting that she was not going to live. Slowly she gained strength and conditional baptism was performed at church in the spring. This was the beginning of life for Ruth, the second of three daughters of Albert and Amelia (Mollie) Feuerstein Adelman in Chesaning.

Ruth went to kindergarten at Chesaning Union School. Her mother kept her in public school in order to postpone First Communion and the subsequent expectation of fasting each morning to receive the Eucharist at daily Mass, followed by a cold breakfast in school. “Because I was still rather frail, my mother avoided the ‘breakfast problem’ by leaving me in public school through second grade and postponing First Communion.” As a third grader, though older and taller than the other First Communicants, she fit in happily.

In her junior year of high school Ruth was considering a career in teaching. When Sister Victor Flannery asked, “Have you ever thought of becoming a Sister?” she was taken by surprise but admitted she had. After graduating from high school, Ruth attended Michigan State Normal (now Eastern Michigan University) in Ypsilanti. She received her B.S. in 1941 and taught kindergarten in public schools in the Battle Creek area for two years.

The thought of entering the convent persisted and in June 1943 Ruth entered the Grand Rapids Dominican community. Six years older than others in her class, and already a teacher, she was assigned as a postulant to teach high school English and Medieval History at Marywood Academy. Upon entering the novitiate, she received the name of Sister Adrienne of the Immaculate Conception.

Kindergarten was her specialty from St. Thomas and St. Stephen here in Grand Rapids to Holy Rosary Academy in Bay City and then back to Marywood from 1966 to 1982. At Holy Rosary, in addition to serving as office manager, she became the bookkeeper and later principal and superior. Although very busy, she was always available and pleasant.

Attending two Montessori educational conventions had whetted her interest and in 1969 she attained a Montessori Primary Diploma from the National Teacher Training Center in Chicago. That fall the former Marywood kindergarten moved from the “little white house with the picket fence” into the Green Building as Montessori Pre-School. At the request of parents a primary class for grades 1-3 opened in 1974 in the Red Building. Again Sister Adrienne was wearing two hats, focusing in the mornings on math and science in the primary class; and in the afternoons on the secretary-bookkeeper role in the pre-school. When the Montessori School moved off campus, Sister Adrienne left to minister in a new way and place.

Soon she found herself nurturing families along with the flowers and vegetables at Guardian Angels Parish in Manistee, Michigan. Here, she assisted parents of young children during Sunday liturgy, teaching them how to draw the best out of their youngsters. She helped parishioners at funeral lunches and other events. Throughout her three years at Manistee, Sister Adrienne enjoyed walking along the Lake Michigan shore viewing the sunsets.

In 1986 she returned to Grand Rapids and served as a tutor for a year each at St. Stephen and Immaculate Heart of Mary; as a reading teacher for four years at St. Paul the Apostle; and back to St. Thomas for tutoring. When she returned to Marywood in the 1990s, she helped in the finance office and also tutored children learning to read. Gardening remained a lifelong interest and every window sill with natural light was graced by a beautiful plant, usually in full bloom.

Sister Adrienne earned an M.A. in Education from the University of Notre Dame in 1954. In later years she attended enrichment programs given by the Congregation in Grand Rapids; summers at St. Norbert College’s Theological Institute (DePere, WI); the Weber Experience (Adrian); and the tour of our New Mexico missions.

A quiet, hard-working, unassuming person, Sister Adrienne was quick to volunteer whenever service was needed. She took delight in tending the garden, especially her rose bushes; she carried many a tray and rosebud or bouquet to cheer the sick. Others in the house brought their wilted plants to her, hoping she could restore them to health – which she nearly always did. And for many years she graced the casket of each departed Sister with a beautiful rose.

In September of 2008, the Grounds Committee of Marywood listed a number of Sister Adrienne Adelman’s good works in her faithful care of Earth; they conferred on her the title Master Gardener and Keeper of the Grounds.

We ask God to bless our dear Sister Adrienne with eternal peace as the angels escort her into the heavenly garden of our loving Creator.

Sister Adrienne is survived by her sister, Jean Swantek, nieces, nephews, cousins; many friends and members of her Dominican community.

We commend Sister Adrienne to your prayers.

Sister Adrienne enjoying the outdoors on a canoe trip on Big Manistee River in 1985.

Sister Adrienne working in the garden at Marywood.

Sister Adrienne making a little basket bouquet to cheer someone up.