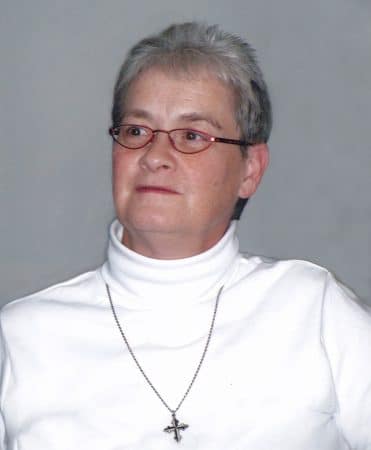 Kathleen Ellen Nelson was born in Grand Rapids, Michigan, on August 20th of 1945. Growing up in Wyoming Park, she was the third of four children born to Frances and Arnold Nelson. Older siblings Peggy and John preceded her and a younger brother, Eric, was born just nineteen months after her. Kathy’s ﬁrst call to religious life came as early as the eighth grade, when she became an aspirant with the School Sisters of Notre Dame in Mequon, Wisconsin. Eventually, it was decided that she needed to return home to ﬁnish her high school education, graduating from Mt. Mercy High School in 1964.

The following summer, she met the man of her dreams, saying “as soon as I saw this one man, I knew we would marry.” Nine months later she became wife to Jerome Przybylski. Following their wedding, children, Jerome Arnold and Russell Edward were born, followed some years later by Anthony Joseph and Roseanna Marie. Russell, born with major health challenges including epilepsy and cerebral palsy, brightened the lives of everyone he met and was one of God’s greatest gifts to Kathy. A ﬁfth child, named Samee, was miscarried at just thirteen weeks and was buried in the family plot at Resurrection Cemetery. Years later, Kathy welcomed her ﬁrst grandchild, Samantha Michelle, named to remember little Samee.

Family life was everything for Kathy; she rejoiced in the celebrations of births and birthdays and grieved family losses and hardships. As her children began school at Blessed Sacrament, Kathy befriended several of the mothers, who would soon become her closest friends and most reliable support system. Together, the women called themselves “the Coffee Group,” and got together frequently for the next several decades. As their children attended school, Kathy busied herself with her longtime hobby, cake decorating. Through her hard work, grit and creativity, Kathy even opened a licensed bakery in her own home, and also taught cake decorating and baking classes.

In November of 1992, without warning, her husband, Jerome suffered a massive cerebral hemorrhage from which no recovery was possible. The entire family was devastated as he was a dearly loved husband, father, brother, and friend to many. Three years later, in 1995, their son Russell, at 27 years old, passed from a perforated bowel. Amidst the heartbreak Kathy found peace in knowing that her son and husband were reunited in Heaven. Although the sadness of these losses remained, Kathy delighted in seeing her family grow, as she welcomed many grandchildren into her arms the following years.

Kathy continued to work at St. Mark’s Episcopal Church before obtaining a position with the Diocese of Grand Rapids. The idea of a religious vocation began to tiptoe into her mind again and she contacted Sr. Gretchen Sills and the discernment process began. In 1998, Kathy entered the congregation and completed her novitiate training at the Collaborative Dominican Novitiate in St. Louis, Missouri. She made ﬁrst profession in 2001 and ﬁnal profession in 2004. Upon her death, Kathy, endearingly known as Sister Kathy, committed 22 years to religious life as a Dominican Sister.

Sister Kathy spent full and enriching years with the Sisters at St. James Convent in a home marked by extraordinary hospitality, involvement in social justice, and artistic endeavors. Sister Kathy advocated for women’s rights, anti-racism and equality for all. Her love for all and deep spiritual quests were well practiced through her ministries including chaplaincy in local hospitals, home health care and pastoral visitation. Her ﬁnal ministry was as the manager of the Dominican Center Bookstore. The business ﬂourished with Sister Kathy’s special touches, alongside her admiring volunteers who nurtured the bookstore into a thriving enterprise, much admired by all who visited.

In what became the ﬁnal years of her life, Sister Kathy underwent many surgeries. After countless complications and much prayer, she decided to decline further procedures and entered hospice care. Her daughter Rose and partner Julie became caregivers to this resilient and resourceful woman, determined to give her the loving care that she had extended to so many. Sister Kathy remained joyful in her ﬁnal days of life, enjoying reading cards sent from loved ones, praying with those able to visit and enjoying music and shows throughout the day.

Kathy died peacefully on November 4, surrounded by her loving family. A woman of unshakable faith and abiding love is surely united now with husband, Jerome, children Samee and Russell as well as her sister Peggy, brother John, and grandson Jonah. Years before her death, Sister Kathy would say, “When I die God, we have to talk.” We can rest assured that she is having that talk with God, whose love she never doubted, but for whom she has many questions about her life of unspeakable sorrow and immense joy.

Sister Kathy is survived by her brother, Eric Nelson (Mary), sister-in law Shirley Nelson, and her children, Rose (Julie), Tony (Kim) and Jerry (Amy). She is grandma to 15 grandkids, and great-grandmother to 8. She is also known as Aunt Cookie to dozens of nieces, nephews and their children. She also leaves a loving group of neighbors, Sisters and longtime friends of her coffee group. She will be forever missed.

We commend Sister Kathy to your prayers.

We have been blessed by Sr. Kathy’s business acumen and creativity; gifts that have helped transform the ought as they explored the spirituality of relationship with self, others, and God. She was the visionary and manager of the store for almost 10 years.