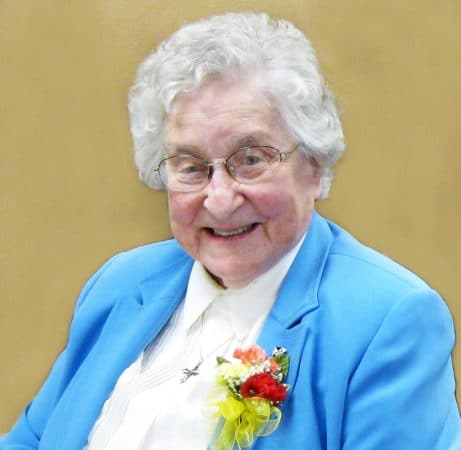 The one point I would ever stress is God's Infinite Goodness to me and my love and gratitude to Him.

Between 1943 and 1962, Sister Carmella taught in grade schools in New Mexico: St. Francis, Ranchos de Taos; San Juan Pueblo; Holy Cross, Santa Cruz; and Our Lady of Belen, where she was principal as well as eighth grade teacher. In Michigan, Sister Carmella taught at St. Joseph, West Branch; Sacred Heart, Merrill; and Our Lady of Grace, Dearborn Heights. Sister Carmella was a happy and successful teacher, declaring, “When I became a teacher, I loved my kids. During parent teacher conferences, I only had good things to say, and if there was something bad, I’d try to make it into something good.”

Meanwhile she had continued her academic studies in the summer earning a BA from Aquinas College; a Master’s in the Art of Teaching Religion from Providence College, Rhode Island; and a Master’s in Educational Administration from Michigan State University. In addition, she studied at St. Joseph on the Rio Grande, University of Michigan, and St. Norbert’s College in DePere, Wisconsin.

In 1962 Sister Carmella began a new phase of ministry. She served for three years as director of aspirants and teacher of ninth grade at Marywood Academy. The following two years, she was the director of postulants. Then for seventeen years she taught high school and chaired the religion department, first at Catholic Central, Grand Rapids, and then Sacred Heart Academy, Mt. Pleasant. Her last mission beyond the Grand Rapids area was at the twin parishes in the Thumb known as St. John Parish in Ubly and St. Columbkille Parish in Sheridan, where she was Director of Religious Education. It was here at the time of her Golden Jubilee in 1995 that the people she served summarized her presence among them: “Caring and compassionate.”

With her sibling sisters, Sisters Magdalena and William Mary, Sister Carmella visited their mother nearly daily in her last twelve years at the Little Sisters of the Poor and later at Villa Elizabeth. This ministry is described by Sister Carmella as a mutually beneficial happening: “We were able to bring joy, happiness, smiles, listening ears and physical help to many other beautiful older people who enriched our lives each day.”

Sister Carmella was blessed with boundless energy which she generously spent on every undertaking. As she neared the completion of her last mission outside of Marywood, she was named Citizen of the Week. The local Ubly newspaper paid tribute to her with these words: “. . . she reaches beyond the boundaries of a job description by visiting the sick, lending a hand baby-sitting, comforting those who have lost a loved one, and staying active in parish functions.”

A dream came true for Sister Carmella in 1985 when, along with Sister Magdalena, Sister William Mary, Sister Margaret Kienstra, Sister Sheila Wood and family members, she visited Ireland as part of a Jubilee celebration.

Sister Carmella loved community life with its opportunities for prayer and liturgical celebrations. She sang in the Marywood choir well into her nineties and was a cheerful presence at every celebration of the Sunday Assembly. She also enjoyed throwing a party and dancing the Irish jig. Her hobbies and interests were many: music, art, needlecraft, reading, stamp-collecting, and calligraphy, which she put to frequent use.

In 1996, Sister Carmella accepted the offer for a sabbatical year. Returning from this experience, she became a resident at Marywood where she served in the capacities of sacristan and in the role of support services.

The first of the three Conway Sisters to enter the Dominican Congregation, Sister Carmella was also the leader of the trio in laughter and zest for living. Their joyful demeanor and generous service was a gift beyond measure. Surely, eternity is now reverberating with their boundless energy and Irish laughter.

Sister Carmella is survived by nieces, nephews, many friends and a loving community.

“You have not chosen me, but I have chosen you and have appointed you that you should go and bear fruit and that your fruit should remain.” - John 15:16

Through the years from Reception of the Habit and my years as an aspirant and postulant, I feel richly blessed that God has chosen me and has continued to support, enlighten, and direct me in His service. I thank my beloved Dominican Community, my dedicated parents, my relatives, friends, and students who have nurtured me through all these years. May God be praised!

How can I ever thank our Good God for all of the blessings He has bestowed on me these years of ministry in our Dominican Family? He has given me gifts that I have hope-fully used to minister to His People. They, in turn, have inspired and nurtured me on my long journey.

I was baptized Rita Rose, born September 19, 1922 and was the fourth of seven children of William and Blanche Conway in Allegan, Michigan. I joined the Grand Rapids Dominican Sisters in 1940 and in 1941 I received the name Sister Mary Carmella of the Blessed Sacrament.

I studied and earned a BA from Aquinas College, an MA in Teaching Religion from Providence College, Rhode Island and an MA in Educational Administration from Michigan State University.

I was blessed to have taught in various schools in Michigan and New Mexico for over fifty years, claiming that “every place I’ve gone, I liked.”

I moved to Marywood in 1996 where I continue to serve in ministry as a lector, choir member, and correspondent in my living group.

Pray world and local governments grow in justice for all citizens

Sister Carmella serves as lector and ministers to Sisters and others in Dominican Chapel at Marywood and St. Catherine Siena Chapel at Aquinata Hall.

A Blessing for You on this Saturday After Thanksgiving