What is religious vocation? In professing our vows as Sisters we promise to give of ourselves — through faith in God and in service to the Church and to the world.

Consecrated life is a response to God’s invitation to deep friendship and loving service to others. In living a vocation, we give witness to the life of Jesus through vows of poverty, chastity, and obedience.

“Be who God meant you to be and you will set the world on fire,” said Saint Catherine of Siena, one of our patron saints and an early doctor of the Church. The freedom, so explicit in her words, has led each of our Sisters to share herself with the world through ministries of all kinds.

Religious life is a vocation to live Gospel values. 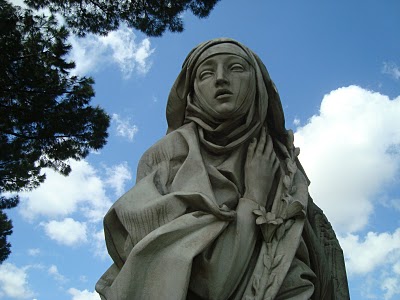 Who do you say that I am?

When my nieces and nephews were very young, I would often ask them, “What do you want to be when you grow up?” and in their young imaginations, their fantasized responses were “an astronaut, a rock star, a Ninja or a Princess.” Well, now that they are all grown up, I report to you that we have no astronauts, rock stars, Ninjas nor royalty in the family.

We all have to answer crucial questions in life, and as we mature, the question “What do I want to be when I grow up?” brings about other questions to ponder upon, such as, “Who did I become as I grew up? And maybe “With whom would I like to spend the rest of my life?” “Who are my friends?” …even in social media, who do I follow on Facebook? on Twitter? And who are my followers on social media? “How do others see me?”

A Japanese Proverb says: When a character of a man is not clear, look at his friends. A similar one in English is: Tell me who your friends are, and I’ll tell you who you are. It seems to me that these proverbs tell us that our identity is often defined by our associations, by those with whom we hang around, by those whom we follow.

The Gospel today presents us with a powerful exchange between Jesus and Peter. Realizing that Mark gives us the scene to teach us about Jesus, it is nevertheless tempting to wonder what was going on inside these two.

The first part of the Gospel provides a familiar scene of Jesus walking with his disciples, as they were now accustomed to doing. It had become a regular pattern in their lives – they had become quite settled in his company having shared interesting stories, witnessed many miracles, and surely shared many profound conversations. They might have never been so contented in their lives, and as far as they were concerned, this was what they were meant to be ‘when they grew up.’ Following him was beginning to sound like the ideal second career.

Then Jesus asks that crucial question: Who do people say I am? What do you think people think about me? is his basic question. Jesus doesn’t really want to know what the Apostles have heard among the crowds; he wants to know what they have come to believe about his identity. And, without hesitation (though they should have known better), he gets an honest answer: “Some say John the Baptist, other Elijah, and still others, one of the prophets.”

When he asked them again, the question changes to them: And who do YOU say I am? They relied on Peter, gave him the thumbs up, and Peter proudly proclaims: You are the Christ!

At the time ‘the Christ’ was the promised Messiah with overtones of political leadership and the restoration of Israel’s glory days of King David. Peter had just identified Jesus as the Christ, the Son of the Living God! There’s a lot behind that answer. He was the Christ – the Messiah – as they thought, yet to others, he was ‘just’ another prophet.

However, what follows is Jesus offering a correction on that common opinion. He would be a suffering Messiah, much like Isaiah’s description in our first reading today. Peter is shocked. “Not you Lord!” he says, and that rebuke caused Jesus to turn on Peter.

Could it be that Peter came to recognize that to be a Christ-follower was more than a fantasy? Could it be that it meant being like Christ ‘as he grew up?’ It was beyond the faith of believing and knowing that Jesus was the Christ, for what good was that faith if it did not have works? Can that faith save him? Knowing that the Messiah had chosen them to be his followers meant more than having faith. To be a ‘Christ-follower’ meant to be ‘Christ-like.’ It was far beyond the childhood game of “Following the leader.” It meant taking up the cross.

Today Jesus still asks, “Who do you say that I am? …and as he said to Peter, he adds, “Get behind me.” And he starts walking.

Both Saint Dominic de Guzman and Saint Catherine of Siena, our patrons, spoke and lived the Word of God preaching mercy and hope against inhumanity. Courageously, they questioned systemic thinking and behaviors, and in doing so, changed history. They are among many women and men of history whose ideas, values, beliefs, and manner of living changed the world.

What does it mean to “be mercy” and “be mercied”?

“Our patron, St. Dominic de Guzman, preached that mercy is a gift from God and he traveled to spread the Good News. In the Dominican tradition, we trust in the truth that we are formed, and transformed — over and over — through the pillars of our Charism: prayer, study, community, and service. And, as preachers, we extend invitation to you, to others, to be transformed in the same way.  Two of the ways we foster the ability to let ourselves be mercied is through contemplation and study. Contemplative prayer is a practice that we can cultivate ourselves and teach to others as we listen for God’s promise of mercy, love, justice, hope. These are the truths we seek.” – Sister Maureen Geary, OP

What is the Dominican Charism?

Our Dominican Charism, our mission, has not changed since the days of Dominic de Guzman, our patron saint and founder of the Dominican Order of Preachers. It is, however, for us to renew the spirit of our mission so as best to meet the needs of humankind today. As seekers of Truth, we Dominicans, through prayer, study, and contemplation see the problems of tomorrow’s world and be ready, with courage and reason, to bring the answer of Christ to these problems. That is our Charism.